Home » Creativity » ‘And so to bed’. Learn to blog with Samuel Pepys and this wonderful BBC dramatisation of his diaries

‘And so to bed’. Learn to blog with Samuel Pepys and this wonderful BBC dramatisation of his diaries

This first episode is a wonderful interplay between domestic and civil life, the prospect of joining the ship that will fetch the King from exile, while the ‘wench’ who works for them refuses to kill the turkey they’ve been feeding up because it’s her friend.

On the 1st of January 1660, the 26 year old Samuel Pepys decides to start keeping a diary.

How many of us have begun on the 1st of January never to get beyond the month? Or choose to pick it up again after an absence. Don’t let this be an excuse, start now. What did you have for breakfast? And if that’s too mundane what’s you solution to the debt crisis?

In the first episode Pepys is behind with his rent, he gets drunk and both he and his wife wish for a family. Pepys reflects on the great events of the 17th century but he also tells us what people ate, wore, what they did for fun, the tricks they played on each other, what they expected of marriage, and of love affairs.

In this episode some house guests play a game after dinner called ‘Getting Married’. By all accounts it sounds like a 17th century invitation to do some wife-swapping. 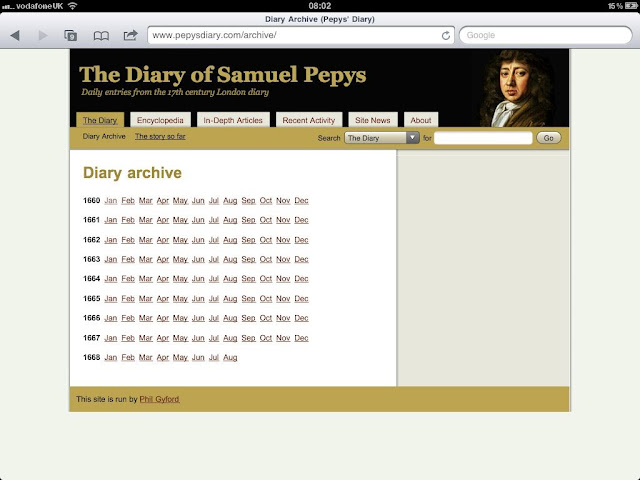 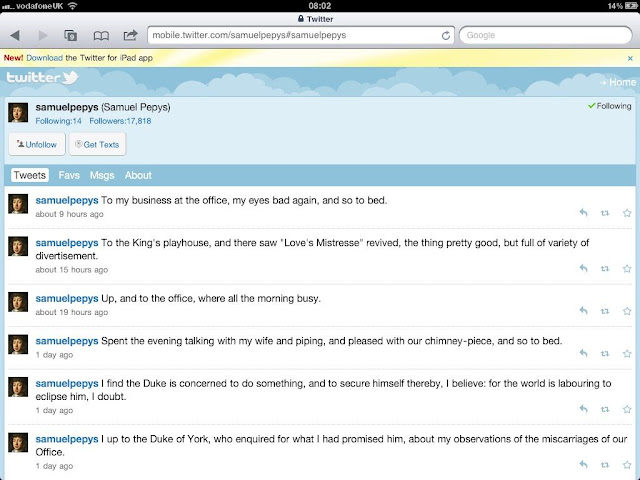 Read his diary, offered on a the basis of ‘on this day 350 years ago.’

Nothing’s changed much, the most important things in our life are loves, family and friends.

Our lives may touch on the politics and events of the time, they may not. Pepys got through the restoration of the King, Plague and the Fire of London.

He so often ends is entry with, ‘and so to bed’.

This reflects the typical keeper of a written diary, you tend to use the evening to catch up. I have to wonder if he had given up the diary he may have produced some children. I stopped keeping a diary on getting engaged after 16 years of writing – I had better things to do in bed than prop myself up on one and scribble secret notes into a hardback book. In any, there is no longer a best time to ‘blog,’ Twitter like you can post an entry whenever you like, as the events unfold or as a thought crosses your mind.

For radio for boring bits have been left out; it therefore reads like a novel.

Not a recommended style for these pages, but great for an external blog in WordPress (HERE), Blogger or LiveJournal. Or my favourite, Diaryland.