Home » E-Learning » What it take to become a digital scholar

What it take to become a digital scholar 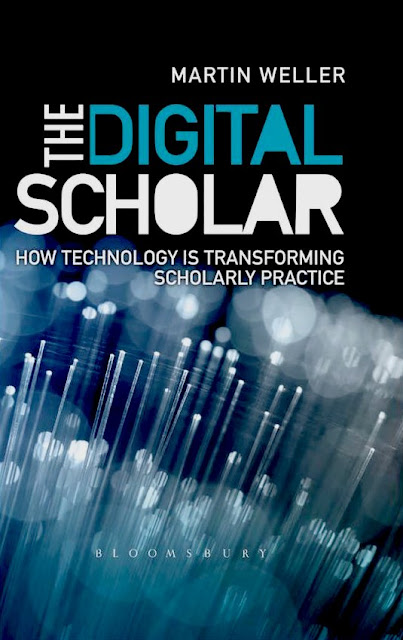 Introduced to the power of blogging by John Naughton

(Worth following in the Guardian. Surely a demonstration of how academics blur the line between academic and journalistic writing styles successfully, just as Weller intimates that students will have to learn to differentiate between social networking writing styles and the academic style of an assignment, paper or thesis?)

· Give all sides to the argument

· Why academics can’t do the elevator pitch

The Digital Scholar was written through a blog to explore the advent of new technologies.

(By coincidence I am using it to prop up the iPad)

Blogging for around five years

(I’ve used Flickr, and Tumblr, even Kodak Gallery in its time. Now I put everything into Picasa Web. The 250 grabs, charts and images are open to share. Dion Hinchcliffe offers his social media diagrams free as separate assets in Flickr River).

‘With special thanks to’

By sharing content online I believe I may finally find my own way to publication.

Many of these services did not exist or were in their infancy in 2004.

1) The quantity of information available – all digital compared

contributions by video and audio

3) The richness and range of contributions to include blogs, comments and

A shift I attitude to the legitimacy of these contributions.

Both a physical object and complementary material.

Another posting a weekly video to encourage debate.

sufficiently broad term, not only teaching and research,

not just engaged in research and employed by universities.

Someone who employs digital and open technologies in a particular field.

Bloggers link to each other, democratic and easy to set up.

Epitomy of the kind

of technology that results in innovation.

Read or unread, daily or months,

How do we recognise talent?

Should people separate out that academic and informal lives?

All scholars are digital if they use a word processor and PowerPoint. But this

is ‘business as usual’.

All digital files and shared by the same method.

Easy distribution VS restriction of

scholarship to libraries, conferences, lectures and seminars. Once digitized the

Dunbar. Friends 150. Reinforce with interaction. Online with a wide group of

Tim O’Reilly 2004 the architecture of participation.

Finely worked material of the journal, compared to seeing where things will lead

The value of a person’s individual network for distribution.

Fast, cheap and out of control.

all three is significant to education.

Fast to write and set up, no need for central services.

Cheap tools that have a premium, no need to turn to a budget holder.

Out of control. Outside normal institutional controls.

Money/payment and the need to persist with a certain system.

VS. Dystopian and Utopian points of view.

VS. Technological determination – humans controlled by the kit, rather than the

Taking something and using it in a way never imagined

E.g. Flickr started as a game that used photo sharing.

3) Other industry changes in music and newspapers

9) How digital scholarship may change teaching

10) Analogy of networked weather – you can’t help but be touched by it.

Not peripheral, or an issue to resolve, but rather changes to society … As

VS. Suggestions that our students have changed and cites Marc Prensky.

Separating myths from the hype.

What are the solid foundations.

To research say on personal health

Gen X against pointless interaction in class and kind of connection online.

net Gens more likely to be disappointed by how tech is used.

Net gens differentiate between writing to socialise compared to writing for

in getting those with poor writing skills to blog.

A good deal of variance.

· Express themselves in personal language

· Visiting a narrow range of sites

The net Gen literature sees difference where none exists.

18-22 students outnumbered by mature students in the US.

Significant activity online across a range of society.

would design into a programme of learning, and so it is with many other topics,

on or off the curriculum, formal or informal, from knitting to physics.

Learn as the key motivational desire.

Demonstrates many of the characteristics:

geographical and other barriers.

Broader trend and philosophy of the Internet.

OU 3 million within 2 years and helped recruit students to courses 7,000.

Several hundred years to create the lecture Based models

How do universities remain relevant to society?

Some perfect storm … Convenient for some to see. The Net Gen literature is

exaggerated, overblown, HE is not about to face a tectonic shift.

Firm evidence of benefits and that it is necessary.

2007 those using social networks in the minority, now in the majority.

Asses which of these technologies will be significant.

Why do Students choose a university?

Not because of the technology used.

Cost of living in the uni area

By Jonathan Vernon in E-Learning on September 8, 2011.
← The Digtal Scholar (2011) Martin Weller 6 reasons you may be able to call yourself a digital scholar →