With a title like ‘My Mind Bursts’ I can justifiably offer moments of curiosity and indulgence. The First World War is an interest of some forty years – not least because my grandfather served in it as machine gunner and survived. In another blog I’ve begun to sketch out ‘a death a day’ for the duration of the war – to reach the figure of 9 million there were, as we know, some busy days indeed. Researching this is uncovering extraordinary moments I hadn’t heard about at all, whilst others, such as the assassination of Archduke Franz Ferdinand the heir presumptive to the throne of the Austro-Hungarian Empire and his wife the Duchess Sophie are thoroughly covered. Here I go in search of what happened – what would I see if landed there to observe and could go anywhere and speak to anyone? What is the background to all of this? I uncover the mess and hypocrisy of the Imperial Family – their behaviours and culture, but also a love story with a tragic ending.

In doing so I have found myself editing Wikipedia, turning increasingly to Encyclopedia Britannica for something accurate while stumbling across some extraordinary resources, not least a forum for descendant of the Hapsburgs to share stories and family photographs. It is going to be a busy decade leading up to the centenary of the First World War and its aftermath. Have the consequences of that war yet been fully resolved? Trouble in the Balkans was its beginning and end – yet Europe, together, federalised or apart continues to be an issue – just so long as it doesn’t become violent again. 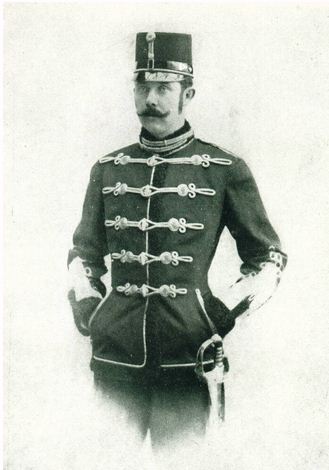 The Archduke Franz Ferdinand new his mind unlike others at the Court of the Emperor Franz Josef of Austria-Hungary. When he fell in love with someone ‘beneath his station’ he would not budge. 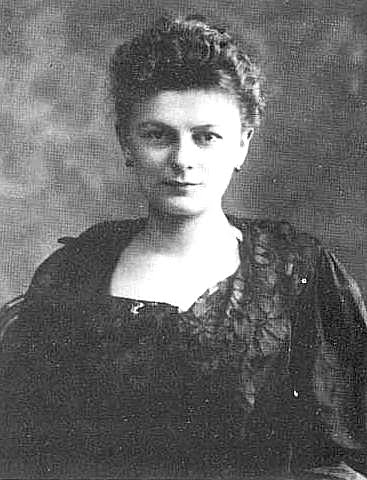 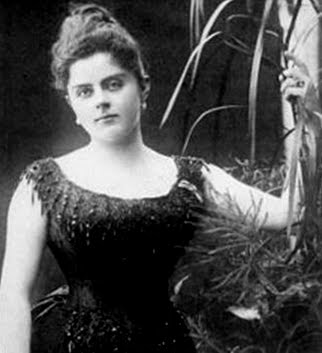 Meanwhile his younger brother Otto married a Royal and kept a mistress, just as the Emperor Josef had done for decades. This kind of behaviour came unstuck when the heir presumptive to the Crown, Count Rudolph,  in an unhappy marriage, started to have an affair with a young girl, possibly as young as 15 when the relationship began and certainly only 17 when it ended. 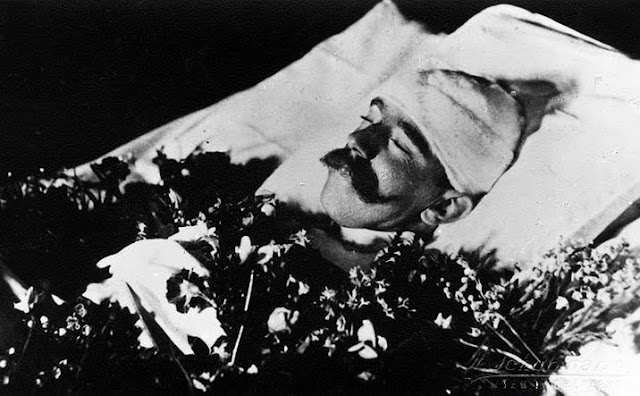 In January 1889 he kills his young mistress rather than give her up then commits suicide. Rudolph’s uncle, Archduke Franz Ferdinand’s father  Archduke Karl Ludwig and the next in line to his older brother Franz Josef, renounces the throne within days in favour of his 26 year old son. 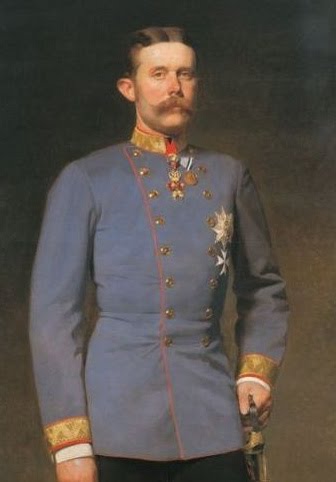 Still not married, Franz Ferdinand may also have considered renouncing the throne for Sophie Chotek. She  was indeed considered by the court to be an unsuitable match due to the lack of broad royal pedigree in her lineage. Franz was exceedingly wealthy having inherited an uncle’s vast estates when he was 12 so perhaps he bargained with the Emperor – let him marry Sophie and he would indeed become the heir presumptive. 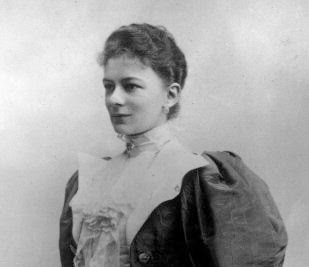 Deeply in love, Franz refuses to consider marrying anyone else. In turn, Pope Leo XIII, Tsar Nicholas II of Russia, and the German Emperor Wilhelm II make representations to the Emperor. 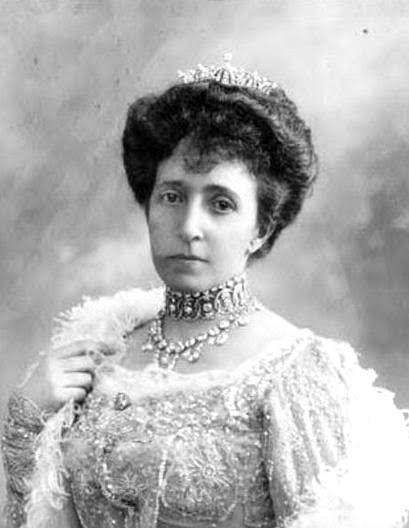 It is almost certainly his stepmother, Marie Theresa who is one the most influential at court – as after the death of Count Rudolf the empress had retired from court life and Marie Theresa had taken a far more active role. 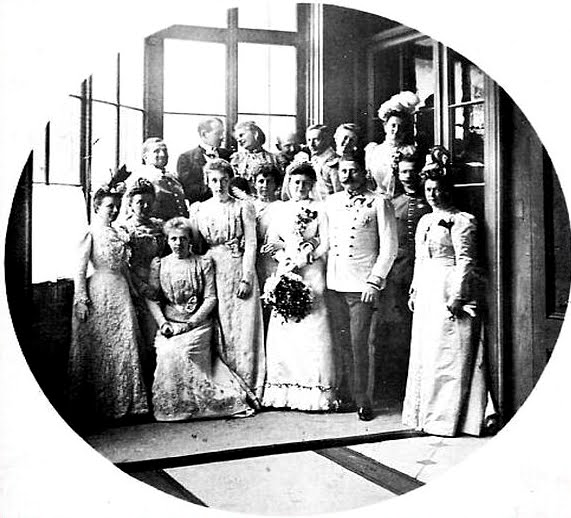 On Sunday 1st July 1900,  in the Chapel at Reichstadt in Bohemia, Marie Theresa’s home, Franz and Sophie are married.

Those present must surely include Sophie’s six sisters and her brother. 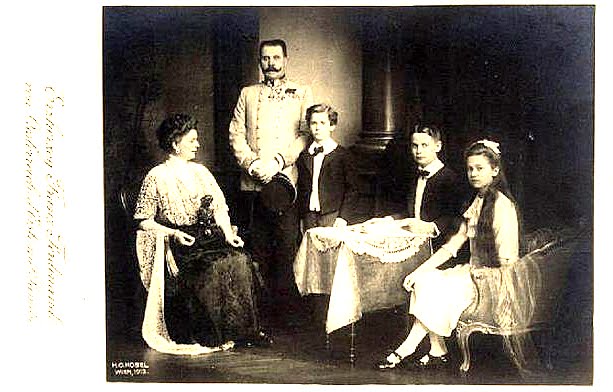 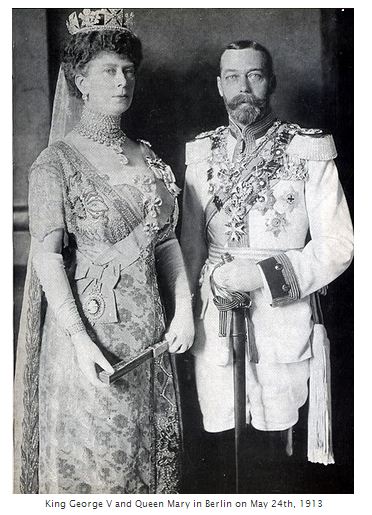 Because of their morganatic marriage, many European royal courts feel unable to host the couple, however, some do so, including King George V and Queen Mary, who welcome the Archduke and Sophie to Windsor Castle in November 1913. 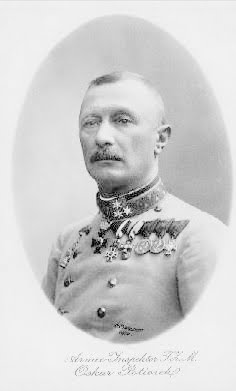 Franz Ferdinand had entered the army young and was frequently promoted, given the rank of lieutenant at age fourteen, captain at twenty-two, colonel at twenty-seven, and major general at thirty-one. In 1898 he was given a commission “at the special disposition of His Majesty” to make inquiries into all aspects of the military services and military agencies were commanded to share their papers with him, which is how he came to be invited by General Oskar Potiorek to observe military manoeuvres in the Austro-Hungarian province of Bosnia-Herzegovina in 1914. 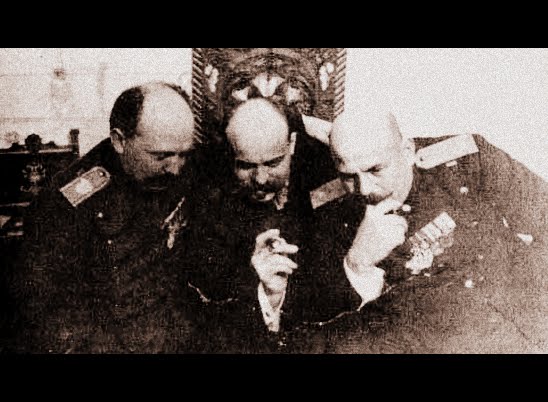 The mind been this plot and previous assassinations – failed and successful – is Dragutin Dimitrijević, a very able,though ruthless 36 year old military man. He knew of Franz Ferdinand’s ideas for a federated ‘United States of Austria- Hungary’ and feared that would put an end to bringing the southern Slav provinces of the old empire into the Serbian fold.

A bomb is thrown at the open top tourer carrying the Archduke and Duchess but it bounces off the unfolded canopy, possibly as the chauffeur spots the danger and hits the accelerator. The bomb goes off under car behind wounding several of the occupants – soldiers from the academy.

This map above is wrong. The car used, as can be seen here, was a right hand drive tourer … until 1938 they drove on the left in Austria. This photograph of the Archduke’s car coming down the Quai Appel also shows it on the left. 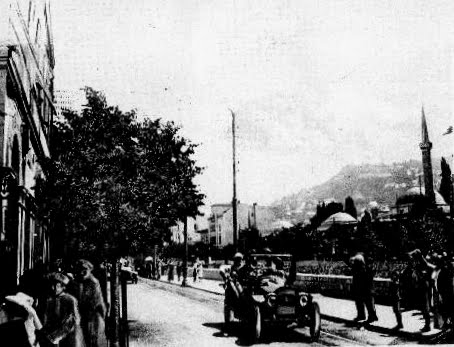 The vehicles in the entourage initially stick to the original itinerary until it is remembered that the Archduke had asked that they go to the hospital to visit the wounded from the bomb attack – so they stop. 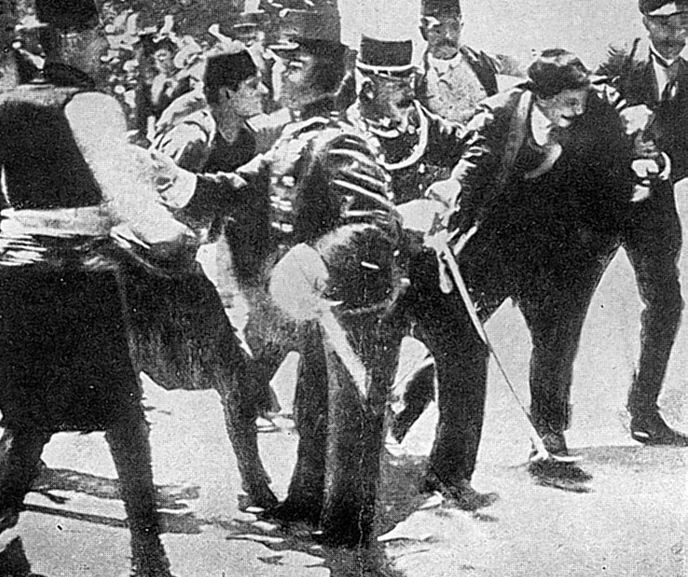 By chance this presents Gavrilo Princip with an extraordinarily good opportunity to fulfil his mission. He raises the revolver he has been practising with for the last few months and shoots at point blank range. The first bullet hits Franz in the neck and the second hits Sophie in the abdomen. 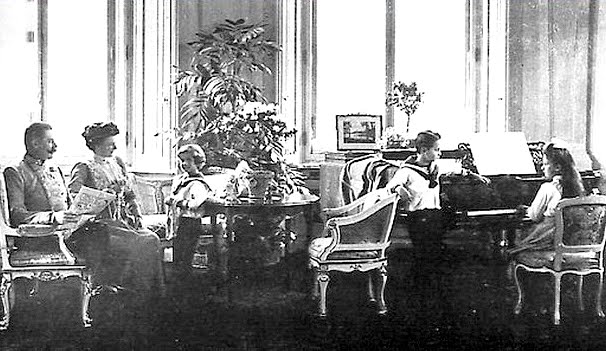 By Jonathan Vernon in Blogging, Collaboration, History, WW1 on January 2, 2013.
← Franz and Sophie – the tragic love story that will forever be considered the opening shots of World War One How to tell the tragedy of two love stories – the power and construction of memorable narrative →