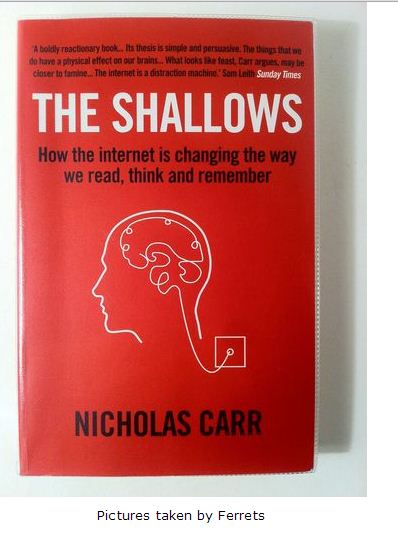 In Chapter 3, ‘Tools of the mind’, after a potted history of maps (not cartography) and clocks (not horology), we get an equally potty view of the plastic mind and neuroscience. Carr is no neuroscientist – three decades ago he took a first degree in English Literature (Dartmouth College) followed by a Masters in American Literature (Harvard). He should stick to what he knows.

Though ‘The Shallows‘ is meant to be unavailable online I started to read a version someone has uploaded before the book arrived in the post. If I had the energy I would cut and paste the digital version into a two column table, landscape view, and write my notes alongside – like a translation. This is what I do with academic papers when they require and deserve close scrutiny. ‘The Shallows’, like any Airport best seller is only worth a once only skim read – I’m questioning my resolve even to do that.

It is like being asked to eat six plates of jelly (jello) and custard.

As a book it is a remarkably satisfactory artifact. Even in paper back the cover has a wonderful fine grittiness to it – like sand. I even open the book and breathed it in. For this experience 10/10. All publishers, especially those online, need to take trouble with the Art Work too. Of course the plaudits sing out ‘buy me, buy me’ but as reviews go they are about as helpful as one liners on the latest blockbuster.

Carr writes well enough, not quite Bill Bryson, but an easy and intelligent read, an amble through the relevant technologies to the present day.

Carr can be accepted as a cultural and social historian, his mistake is to want to want bash this evidence into shape to support his conception of the Internet and its dangers. It is like saying that ‘rural man’ is different to ‘urban man’, that the motivations, pace and opportunities are different. Whilst this may be true, the sorts of changes to the brain that Carr suggest are not occurring.

Carr’s conception of mind is both out of date and misconstrued.

I wonder if I have the strength to read on, not even to refute what he says chapter by chapter. I risk polluting my mind. The pleasure is the history, the cod science is irritating and unnecessary.  Carr is well read and would be a pleasure at a dinner party, but I don’t suppose he’s much of a listener, nor someone whose views are likely to change no matter how convincing the evidence that his hypotheses are mistaken.

My inability to concentrate on this book has nothing to do with what Carr will claim to be by Internet altered mind.

I have some 8 books on the go, 4 eBooks, the others in print form by the bed. It simply fails to engage me, even on the level of making me angry. I suspect that Carr takes an evangelical view on his perspective and couldn’t be changed – I tried telling something reading the Da Vinci Code that it was all made up but they wouldn’t believe me. We human’s have it in us to take things on blind faith. Clearly this is a trait that has brought us in evolutionary terms a long way, but if you want a scientific perspective on the Internet you won’t get it from Carr. If anything, from 2000 when I started buying books in bulk from Amazon and from 20101 when I started consuming e-Books voraciously, the Internet has increased my hunger for books – for their content. My preference is for e-Books for their versatility.

I used always to read with a pen and notebook by my side.

I now do everything on the one device, adding notes, highlighting, bookmarking, sharing snippets to Twitter and Facebook along the way and blogging chapter by chapter too. I stop to check the meaning of a word, or to read a footnote, even to download and read a reference where it helps my understanding. I buy books that are only available in print – Marshall McLuhan, Christopher Alexander, Gordon Bell, Robert Gagne, Engestrom’s Activity Systems (certain specific editions).

At no stage has Carr done either a research degree, or has he studied engineering or computer science or anything that might touch on the workings of the Internet such as e–learning.

He should have studied criminal law as he is good at is constructing a plausible, one–sided argument. Nothing by Carr, from what I can see, has been published in an academic journal – it would not be accepted. Those who have studied the Web, psychology, and neuroscience, would shred him. p.48 on the mind is the exact same shallow and ill–conceived thinking touted by that other writer of bias and conjecture – Marc Prensky (the digital natives debacle is largely his, though currently he’s denying he started that ball rolling).

The structural changes to our brains are infinitesimally minute and extraordinarily complex – a Mozart who has studied and played the piano, or a mathematician such as Einstein, have the same brain just as they have in human terms the same arms and legs. If their personality profiles are to be understood, one could imagine Mozart being the easily distracted, eclectic, butterfly online, while Einstein one imagines would treat it as a tool and an opportunity to stay even closer to the topics that mattered to him. One, in Kirton’s terms an ‘innovator’ the other an ‘adaptor’.

This is where Carr’s lack of understanding of human psychology is so telling.

‘Although the workings of our gray matter still lie beyond the reach of archaeologists’ tools, we now know not only that it is probable that the use of intellectual technologies shaped and reshaped the circuitry in our heads, but that it had to be so’. p.49

This is twaddle on so many levels it feels no more possible or desirable to refute than the enthusiastic chatter of a child. Carr doesn’t strike me as someone who easily persuaded when he has something wrong.

The Internet, as a changing and fluid platform of content, now on smartphones on smart TVs since Carr wrote ‘The Shallows’, where it impacts and changes our lives, the effect on each of us varies.

Human kind is not homogenous.

I got this kind of thing written on my undergraduate essays, in particular when I’d skipped lectures and based my research on back copies of the Financial Times (this would have been for a module on Southern Africa). ‘Journalistic’ was the put down.

This is journalism to be serialised in a Sunday Colour Supplement – it would be acceptable if the view were balanced. I have in mind a book to complement ‘The Shallows’ – a snappy title might be ‘The Deep’ or ‘The Corrections’ but both of these have been used.

An equally plausible stance would be to take everything Carr says and imply that it means the exact opposite – this would be just as imbalanced as ‘The Shallows’ though. The idea that the Internet is making ‘us’ profoundly smarter, that we are being re-wired into a super-race.

My own view is that the Internet is producing a glossary expansion in learning, increasing the depth and scope of education

‘The internet lies at the core of an advanced scholarly information infrastructure to facilitate distributed, data and information-intensive collaborative research’. (Borgman, 2007, xvii)

By Jonathan Vernon in Blogging, E-Learning, Innovations, Language, Life, Writing on February 23, 2013.
← Metaphors in learning The digital ocean in which we swim →