Why skiing is my metphor for life and learning

On the last day, on the last run of my first week’s skiing I broke my leg rather badly. I was 13. I was in hospital for a week. In a wheelchair for two months and had the leg re-broken as it wasn’t setting properly. I spent six months at home. Idiot. But most 13 year old boys are.

I missed the next season.

For the following 20 years skiing mattered – a gap year working in the Alps (Val D’Isere in the Sofitel Hotel working 13 hours a day 7 days a week), a decade later researching a TV documentary and book  (Oxford Scientific Films, Skieasy Ski Guides), falling in love with a fellow skiing enthusiast (we’ve been married 20 years), a honeymoon on the slopes and ten years later, on the slopes with a 4 and 6 year old, then again when they were 10 and 12.

(See above – the last week of the season, Tignes. The only people on the slopes are the ‘seasoniers’ who have worked since December. It is like being on the beach. A stream that flows above Val Claret melts and various ponds form. We ski it.)

Early in the afternoon I’d asked my girlfriend if she’d marry me. I was feeling cock-a-hoop.

We’ve been back twice in the last decade. There have been other priorities. I’ll be taking my 14 year old son out later this month or in April. Is that wise? At this age teenagers really are prone to take risks and can lack the physique.

Reasons to celebrate and look forwards

37 months to the day after starting the Masters in Open & Distance Education (MAODE) I got the final result, for H810: Accessibility in Open Learning – supporting students with disabilities, today. 84.

It has been so worth it and such a better, engaging, effective, experience than my undergraduate degree in a traditional university some decades ago. I feel as if I have earned it for a start. I have survived disasters rather than succumbed to them.

I am a reading, thinking, writing machine.

I feel like someone who has come to skiing late in life and has caught the bug. My mother started skinning in her mid 40s … and in her 50th year (unencumbered by her husband who was with wife three by then) sold the house and did a belated ‘gap year’ working a season in the Alps. The equivalent for me has to be the intellectual challenge of doctoral research.

More reading, thinking and writing – with research and teaching too I hope.

Tutor Marked Assignment One  (TMA01) for H809 (Practice-based research in educational technology) is due on Monday.

‘Practice-based research in educational technology’, to use skiing as a metaphor, is like learning to ski ‘off-piste’. Apt, as the tracks I make are ones I have planned, rather than keeping to the groomed, signed and patrolled ‘safety’ of the regular runs. 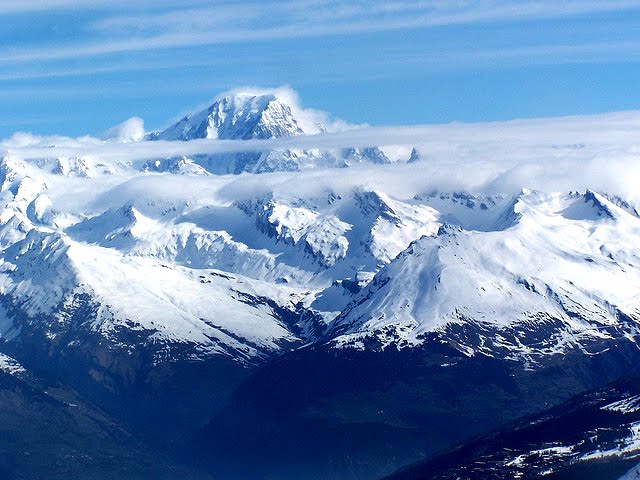 Fig. 2. Mont Blanc – From the Ski Resort of La Plagne,  Above Montchavin. Les Arc on the right . The road to Val d’Isere clinging to the mountain in the middle distance Bourg St. Maurice in the bottom of the Valley

We’ve not been out for five years so it should be a treat. It has to be on a shoestring, so short of hitching to Bulgaria can anyone recommend ways to keep the cost down?!!