Home » Creativity » Paper and pencil surveys vs. online surveys … and the ghost of Douglas Adams

Paper and pencil surveys vs. online surveys … and the ghost of Douglas Adams 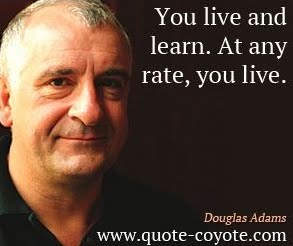 Douglas Adams would have enjoyed the conundrums and shifts and highlighted the potential for farce and inaccuracy, while throwing up some universal truths about us human beings – we are chaotic, unstable and include contrarians amongst us. In particular I wonder about the sense that we have multiple and shifting personalities and behaviours which are in constant flux and either stabilised or destabilised by who we are and circumstances.
In 2001 a diary platform I used introduced surveys and they become an entertainment form both in how questions were posed and what they revealed about the person. As they were public and discussed it was clear that for some these were a performance of sorts and a long, long way from being valid, but often great stories and insightful the way good fiction can be. Adam Joinson talks of people easing off the surveys   – indeed, they are far too easy to create and more often than not these days are for ‘data mining’ rather than research. You know the genuine survey because of the volume of legalese and the ‘boring’ (though accurate) format of the survey itself. And they take time to fill in, rather than survey ‘quickies’ which are likely to be the first stage in a sales pitch.
Completing Job specs online are a kind of survey – it was and is so much easier simply to attach a CV, but few institutions now permit this. How therefore do we, the respondees, maintain control over what we are saying and how this data may be shared, revealed or used. Even the OU’s OLDS MOOC, only now long after it is over, have I read the last couple of paragraphs saying that the MOOC will be used for research purposes and that they cannot even guarantee that identities might be revealed. This therefore leads to bias in the way people self–select – those who do the surveys having an agenda, or wanting to have a voice, while a significant percentage of others won’t go near them (or even have a social presence online). Just because someone isn’t on Facebook or Linkedin doesn’t mean they don’t exist.
As for context, courtesy of the iPad, if I complete a survey and it is ‘fun’ to do then I am likely to be in the bath or on the loo. Or half asleep and in bed with a few minutes to kill before my wife emerges from her study and we both give up for the day. Mood impacts results. People could just as well fit these in while commuting into work – all this has to impact on mood and attitude and therefore the kind and quality of responses. This from someone who will vote red, blue, green or yellow depending on my ‘feelings’ that week.
Do the problems get ‘ironed out’ with sample size? 10,000 online responses compared to ‘100’ off the street for example?
My experience with medical market research is that different interviewers – crabby, old, blunt and plain compared to jolly, eager journalistic and young has a knock on effect all the way down the line – the nature and quality if the interview to start with – but this translates, literally, into the person who analyses these interviews – say 30/40 each an hour long. The scope for bias and inaccuracy increases – and is then reduced to a summary as no one has time to read the full report. (And even where commercial sponsorship of surveys is announced audiences of professional ar conferences, it has been shown, tune this information out – like warnings on cigarette packets).
On time , or late. Location. Kind of recording device. ‘Payment’. Rather the same avatar, rather like a SatNav?
Questionable when feedback or desire to communicate is presented as a survey – so moments after posting I find I have the response, ‘oh, that’s an  interesting concern, I’ll copy in, or make sure they know’.
I have from time to time just ran through a survey I felt obliged to do and given everything the top mark. Just before posting I see that the Likert scale has been inverted or turned around from time to time so I may be saying I thought X or Y was dreadful. I post anyway on the basis that it’ll be marked as an invalid paper but at least I have had the satisfaction of doing the thing and in some instances ‘getting it off my back’ having volunteered to take surveys every quarter from the local council.
As for humanity or humour some of the surveys and results in Viz Magazine or Private Eye say more about the human psyche and British humour than any formal survey can manage.
If anyone fancies a 27 part ‘dream survey’ I’ve had online let me know.
I’ll leave the kinds of things created at the frontiers of blogland circa 2001 to your imagination.
Advertisement