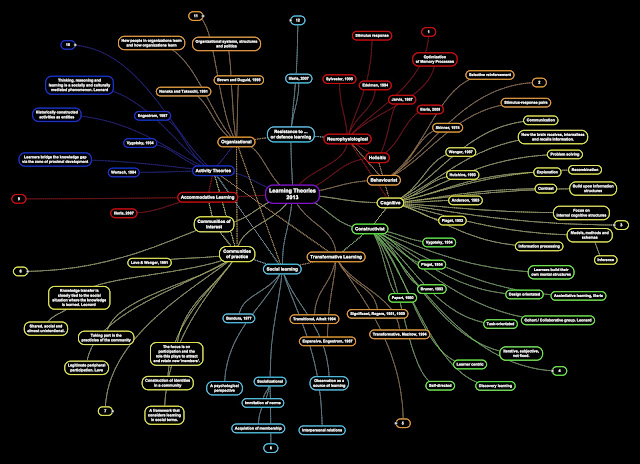 E-learning theories are not new theories, but rather e-enhancements of existing learning theories (Mayes and de Freitas, 2004).
They form “sets of beliefs: about the nature of knowledge and competence, about the purposes of learning, about how learning occurs, about how people should and should not be treated, etc” (Goodyear, 2001, p.51)
Consecutive learning theories don’t replace each other, but complement each other, each contributing its legacy to learning.  Theories can be considered as various levels of aggregation, with associative/behaviourist approaches addressing observable factors, cognitive approaches focusing on the ‘detailed structures and processes that underlie individual performance’ and situative approaches taking into account the social and cultural aspects of learning (Mayes and de Freitas, 2004).
Activity designs are usually a blend of different learning theories.  Being aware of the main learning theories helps building a consistent design and clarifying what type of learning and interaction is intended.
An example provided by Goodyear (2001): It is not uncommon to find some members of a team believing that learners are poor at  organizing themselves and learn best by being fed information in small amounts, while other members of the team want to promote active, student-managed learning.
The table below summarizes key concepts of different learning theories and their implications for online learning, taken from the publications from Anderson, Mayes and de Freitas and Goodyear.
Some comments on the table:
1. It’s difficult to draw sharp lines between these theories.  Some authors distinguish between cognitive constructivism (based on the work from Piaget) and social-cultural constructivism (based on the work from Vygotsky).  The work of Vygotsky formed the basis for the anthropological work from Jean Lave and the concept of ‘communities of practice’. The work of Engeström on activity theory forms a bridge between situative learning (with the activity system, it takes a more social unit of analysis than the individual) and constructivist approaches.
2 .Constructivism doesn’t really fit into the overview.  Goodyear (2001, p.75) mentions the following description of constructivism:
“…learning is a constructive process in which the learner is building an internal representation of knowledge, a personal interpretation of experience. This representation is constantly open to change, its structure and linkages forming the foundation to which other knowledge structures are appended….this view of knowledge does not necessarily deny the existence of the real world..but contends that all we know of the world are human interpretations of our experience of the world….learning must be situated in a rich context, reflective of real world contexts…” In other words, constructivism states that knowledge is relative and is different for every user.  Learning, in this position, means actively building a personal and contextualised interpretation of experience.

By Jonathan Vernon in E-Learning, H809: Practice-based research in educational technology, L&D, MA in Open & Distance Education, The Open University on June 11, 2013.
← Information Overload or Cognitive Overload which is the problem? Taxonomy of Learning Theories →