Home » Collaboration » What is WebScience?

WebScience is the scientific study i.e. the identity of problems, the formulation of hypotheses and their in ­depth scrutiny and analysis, written up and published for sharing, discussion and further debate. This should mean publishing findings with the broadest possible variety of audiences in mind ­ not just to the academic community, from whom further research should be expected, building on the work already done, but to other audiences who through the Web or serendipity, would find the work either appealing, appalling or inspiring.

To help with ‘meaning making’ (Conole, 2011) the metaphor I use to describe the Web is to compare it to the earth’s water cycle where the ocean is awash with digital content, and akin to Web 1.0 ­ influenced by currents and tides, then evaporating into the atmosphere where it forms clouds is shared and transformed (Web 2.0) only to fall as precipitation and return to the ocean.

How much the Web conforms or differs from this pattern helps my analysis and comprehension of what is taking place. 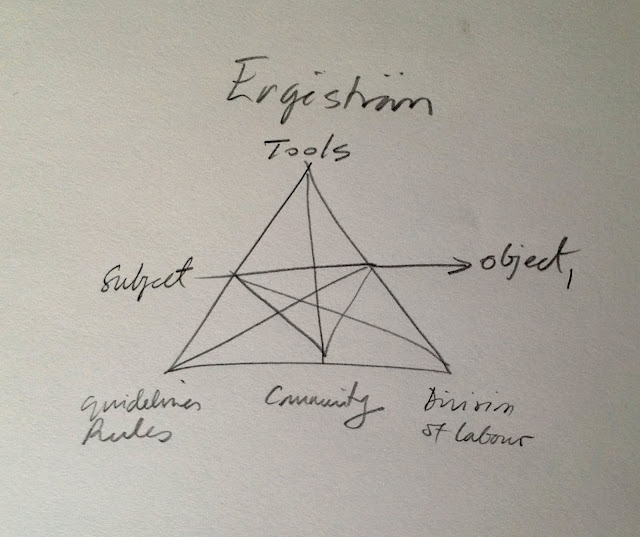 A more organic metaphor that places the Web in one context that interests me ­ the workplace ­ is that used by Yrjo Engeström (2008), in which a transmogrification of the model of an Activity System (Fig. 2) becomes like the ‘fingers’ of a funghi. The web after all is alive and growing. Here, an Activity System should be seen not as a static entity, but rather a living and growing thing. Knorr­Cetina (2003) talks of ‘flow architecture’ and if neither of these concepts ring true for you in then Zerubavel (1997) talks of ‘a mindscape’ while Cussins (1992) talks of ‘cognitive trails’.

Such patterns help describe, explain and predict what is happening in the Web, indeed a third metaphor, building on the ideas of  Vannevar Bush from the 1940s, would be to think of the Web as a brain and to draw on lessons being learnt from neuroscience on how complex systems form connections and clusters. In turn, the brain would be an additional important area of study in relation to assistive technologies in relation to chronic illness and memory loss ­ such as with. Alzheimers or Parkinsons.

In relation to WebSciences at the University of Southampton (SOTON) my interest in the iPhD begins with the lofty desire to ‘make a difference’ and to do so drawing on a combination of interests, professional experience, training and study.

It is from a career identifying problems, devising a synopsis, writing treatments, then scripts where amongst a plethora of industry and government an interest in health has developed. This can be pinpointed further to an interest in what role the Web can play in medicine, to inform and support health workers and patients, in particular patients with chronic illnesses such as Alzheimers, Parkinsons, asthma, diabetes and epilepsy.

Focusing even further to one illness and a particular group I have been considering what role e-­learning might play to improve adherence to drugs.

I have produced training videos for pharmaceutical companies on the use of preventer inhalers.

My interest with e­-learning is to use an inexpensive and readily accessed platform such as Qstream (Kerfoot & Baker, 2012) to deliver appropriate content, including video, through mobile and other devices in order to improve adherence to medication. A literature research has not shown the use of video in this way but there a number of studies where text messaging has been used to improve weight loss (Haapala, 2009), smoking cessation (Rodgers, 2005; Bramley, 2005) and diabetes management (Benhamou, 2007; Cho, 2009; Franklin et al, 2006; Hanauer, 2009; Rami, 2006) which suggests that e-­learning initiatives to patients could change behaviours (Cochrane, 1992; Rand, 1994), while emails to multiple-­choice questions are used to support medical students. (Kerfoot, 2008, 2009, 2009b, 2010).
A research question I would like to consider is:
‘Can the health of moderate persistent asthmatics aged 14­-25 be improved through an e­-learning programme that uses targeted emails linked to tailored short videos online (under 90 seconds) in order to achieve adherence to taking their prescribed asthma preventer inhalers to 80% or more?

The appropriateness and relevance to me of such an approach to research is to start with a clearly define problem and place it in a context where scrutiny can occur. In relation to the Web
increasingly the opportunity exists to use and gather ‘big data’, in this instance therefore to have at one level the belief that the globally, all those being treated for asthma form the data set.
Indeed, patients defined as anyone with a chronic illness who should be regularly and consistently taking preventative drugs for a chronic illness would embrace diabetics, those with epilepsy, Parkinson’s and Alzheimers. It is this bigger cohort, and the the role the Web can play to improve the prognosis of those with chronic illnesses that may be the focus of my interest for doctoral research.

It is vital to understand how people learn ­ insights gained studying for a Masters in Open and Distance Education can in part be summarised in Fig. 6 as from each learning theory comes an appropriate research methodology. How therefore are patients with a chronic illness becoming informed about their condition and why in many cases are they failing to act upon it? 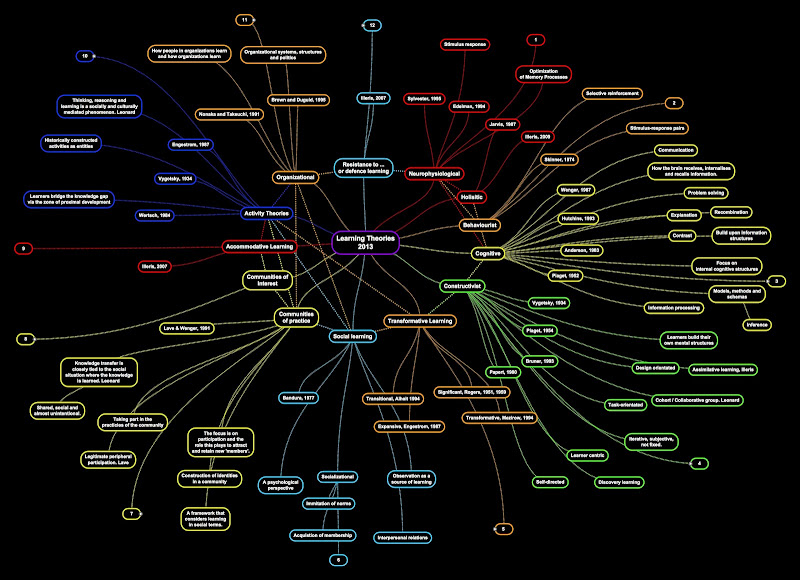 Conole, G (2011) Designing for learning in a digital world. Last accessed 30 May 2013 http://www.slideshare.net/grainne/conole­keynote­icdesept28

By Jonathan Vernon in Collaboration, e-Assessment, E-Learning, e-Moderating, Educational Social Media, Engestrom, H809: Practice-based research in educational technology, Innovations, L&D, Learning Design, MA in Open & Distance Education, PhD, Research on July 19, 2013.
← Not so much a learning environment so much as a learning tool kit In my grandfather’s footsteps →