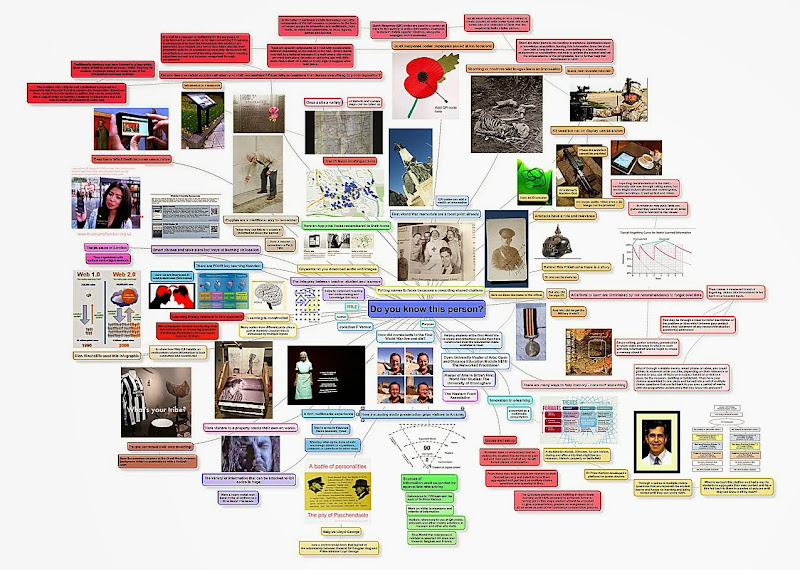 Constructing, aggregating, sharing and remembering stories and images of the First World War. This is created in SimpleMinds – a multimedia tool that supports multiple layers of text, images, video and other file formats. This is a screen grab – a working model will be another challenge.

Think this might qualify as finished artefact Jonathan :-). Impressive!

This is a fascinating looking poster. If I was in a museum or at a bus stop I can imagine passing many happy minutes exploring this! I can’t see the text clearly at the moment as I am on my iPad, but I will try to look at this again later on my laptop. I am probably being a bit picky here, but the module guidance suggests that someone should be able to read our posters in 5 minutes. This poster is so rich in text, images and linkages (not to mention the thought-provoking subject matter) that I think 5 minutes may not do it justice. Could you reduce the complexity a little, or focus on one or two aspects, without detracting from what you want to say? I have no idea how you might share this, or upload this to the eTMA system.

An invaluable suggestion Jo and many thanks. I’m not very good with guidelines for some reason – I need to make repeated mistakes and drafts and have others point out that I am off track! Actually making up Poster Size and putting someone knew to the info in front of it will help me gauge what is five minutes … and what is half an hour.

Ian, thanks for this. Believe it or not I was struggling as for personal family reasons I suddenly found myself with very little time. If others are interest I have to recommend the tool I used here. It is SimpleMinds. Adding photos and screen grabs was a doddle. Obviously I had to have the images in the first place, but I gather and take images out of habit so only needed to download them from the Picasa Web Gallery where they are stored/collated. Then, as with any tool, just a couple of clicks to upload, then the image is attached to that node and can be adjusted in size and moved around. Adding multimedia elements is just as easy though I’m sure it won’t pass muster with the OU TMA system. I then invariably get caught on file size as I no longer bother to compress either images or video as space in the Google “cloud’ I use is so so massive and very cheap. A tetrabite for $2 a month or some such. I have to say putting the content of my brain onto a sheet like this, as a concept board, is enormously helpful. The way to do this without the technology are cut outs from magazines put onto a large sheet of wallpaper using artist’s glue so that you can move the images around … then string and drawing pins to make the connections and post it notes for the text.

How about making your poster interactive? Is that even allowed? Simple rolloevers might be an option so when you rollover a picture with the cursor it shows the connected text. Would mean that not all text would have to be shown at one time. You could even do it that you follow the connections so when you mouseover a picture, related text and pics appear. Then you choose one and move along that “line” of inquiry or “timeline”. The others are not totally gone, just ghosted, so that we see the other pictures but those that are under scruting are much clearer. Just a suggestion 🙂

Thanks Mark, I’ll do this. I’ll get the top layer simplified and legible then have other detail, within the parameters, set behind. This is how the SimpleMinds tool works – you can upload media files and documents behind each ‘node’ but to use this functionality users must of course have the software (free in version 1). I have played with this in a wiki-like form giving a link to a friend who could then edit and add. It has therefore both multi-media and wiki-like affordances. As a hook does the question ‘Do you know this person?’ work? It might have been ‘Do you know this man?’ but I am no less keen, as one picture shows, to identify the women, which in this case is a nurse, but might be an ambulance driver or munitions worker. Pictures of combatants have vast potential as traditionally a soldier would go to a studio to have a portrait taken before they left for the front. This same picture would then be the one featured in the local paper when either this person received an award … or of course are reported missing or dead. In this instance, Jack Wilson, started in the Durham Light Infantry and there is a studio picture of him age 19 but looking more like 15. he was transferred to the Machine Gun Corps where in 1917 he received the Military Medal. The Northern Echo or Consett Gazette then featured him, using the DLI studio photograph given to them by his mother to feature in the newspaper. It is through the newspaper archive, especially of those who died, that war memorial names could be given a face. Which poses another question. ‘Can you put a face to this name?’ Is it OK to have the ‘intended audience’ so open? i.e. inviting anyone who fancies taking an interest to get involved, though mostly appealing to the elderly children or still quite elderly grandchildren of an ancestor/relation. Perhaps a poster in a bus shelter is exactly what I ought to aim at … inviting people to find out who the people on a war memorial were – to give them a face, and a family, and a street address. To discover their story through recruitment, training and combat service …

Great poster indeed! I did not know SimpleMinds but will have a try myself. Reminds me very much of mind mapping tools. I had not thought about using those for presentations but it clearly works 😉 Best Uli

I can see that you have uploaded three different versions of possible poster designs for TMA02. I’ve combined my feedback here rather than posting on each of them separately. I have structured my feedback using the bullet points in the guidance for Activity 6.3. Description. The title ‘who was this man?’ was immediately engaging. I liked that the posters actually demonstrated a part of your project, although an academic conference audience might also expect some explanation of the background to the project, do you think? I found the second ‘who’s that?’ poster much clearer in this respect, with more potential for adding detail. Relevance. In your tags, also indicate the conference theme that your work addresses. I’m guessing innovation. User experience. I found the ‘giving their missing lives back’ poster difficult to read. I couldn’t make out the photo or read the text (might be my old eyes!). The second ‘who’s that?’ poster was much easier to read but lacked coherence. My favourite was the SimpleMind although take note of the guidance in 6.1 that it should be the equivalent of an A0 sheet of paper and able to be viewed in 5 minutes. I would need to spend much longer with this one as it stands although there were some good suggestions in the comments about having roll overs which would allow a reader to reveal the detail in their own time. Suggestions. It’s hard when you are so close to a project to see your poster through the eyes of a naïve reader. Try to assume no prior knowledge. So, I think it would help to include a summary of what the project actually is. Is it a web based collection of photos which users can contribute to? Who are your users? I liked your suggestion in the one of the comments to target this at secondary school children. It is good to see you making use of Creative Commons licensing. Do you need to take into account any licenses which might already exist in respect of the images you are using? I hope you find this feedback helpful.

Very helpful. I’m sitting here trying to simplify the weave – pulling out a few episodes, listening to the feedback and considering the narrative of the learning experience. And yes, trying to remember that I dismiss providing adequate context both in term of the First World War and in particular the perspective from a memoir of a Machine Gunner and Fighter Pilot. I’ve put a couple of simplified elements onto my pinboard which I believe begin to condense. The key decision I have to make is to have an audience in mind, this is ether: secondary school student where this innovative use of Quick Response codes is designed to engage interest, stimulate a project of research, even of contributing and then aggregating into a revision aid. Innovation yes, both at input, contribution, then ‘feeding back’ to prepare students for formal assessment based on examination parameters. The alternative and trickier audience are battlefield visitors, those ‘pilgrims’ who tour the Western Front for example the level of their knowledge varying from considerable as an amateur historian, to only passing as they have an ancestor who served. This second audience may require exactly what the BBC are providing over the next five years regarding commemorating 1914-18 that is ‘edutainment’ with I suspect some OpenLearn product from the OU pulling people into a History module. I have taped an A0 size sheet of paper to the wall and am about to get out a pen. This will help contain and shape it. I also have a Secondary School History text book for GCSE history that I plan to scrutinise as I increasingly believe that the best use of this approach would be a quasi-planned visit to a site of historic interest or a battlefield where perhaps 32 such QR codes have been placed each providing an insight into what was going on that collectively inform and through a student’s own research helps them to ‘construct’ their own meaning. Thanks again. I’ll pay close attention to the guidelines as I press on.