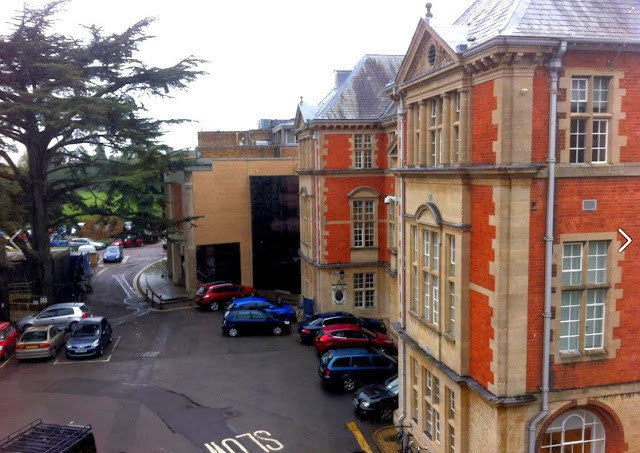 I went to Oxford to attend a lunchtime lecture hosted by the Oxford Internet Institute and the Institute of Social and Cultural Anthropology – anyone can attend.

I stumbled upon the talk, I asked, they said come along.

Everyone else was an OII doctoral research student.

My interest was in the explorative method, a reminder of how anthropologists study ‘in the field’ and as much as anything else its an opportunity to talk to and meet people with similar interests.

Three years online and if I continue it will be lectures and face to face – or blended.

I gave myself three hours to get there – just as well as there were accidents on both the M23 and M25. Coming back … more accidents, a 40 mile tailback. I pulled into a service station for 90 minutes

The M25 was designed as a river, it’s turned into a glacier.

Dr William Kelly is Research Associate at the School of Anthropology and Museum Studies and Professor at the School of Global Studies, Tama University (Tokyo). He gave a talk on what he is learning about Japanese Virtual Worlds by talking to the creators of specialist niche environments for Japanese people.

How to study expressions of culture in a virtual space.

Started to think about questions on:

Culturally specific venues and services – Japan for Japanese, Non–Japanese for Japan, and enthusiasts.

Handling offline and online – Japanese write nothing of their offline world.

What is their business in Second Life.

Are people being themselves or schizophrenic online … and where is the development of the person occurring? Between the two? WK thinks between the two. Many typing v fast, not speaking. Like John Travolta in Saturday Night Fever? Are deceptions successfully played out in VW.

A given in Second Life that everyone is an avatar. Everything is a pseudonym. e.g. an architect in real life who is extremely active and fast in Second Life too. Some have a strong professional engagement, for others it is clearly escape from hard lives.

Two Virtual Worlds (VW) were studied and two specialist creators of content for these VWs. The worlds were the Japanese world within Second Life and a VW recreation of Tokyo called ‘MeeToo’.

It was a lesson in Japanese culture, mannerisms, personalities and behaviours.

Japanese did not like the orientation part of Second Life and were quickly put off. The first company built an alternative that would suit Japanese rather than US sensibilities.

The answer has been to mimic online the most detailed of Japanese habits, from how they greet and how they gesture, to recreate in.