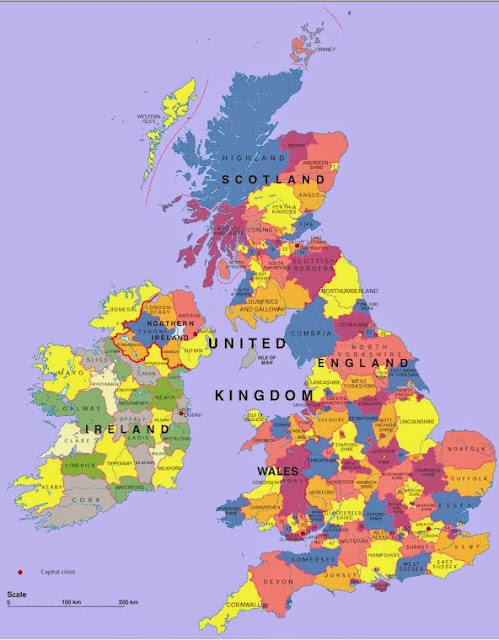 Prompted by nieces and my sister I have now joined the Facebook ‘Positivity’ challenge.

You post three positive things a day for five days then nominate three others to do the same. I have written 15 ‘Positivities’ already and will adjust and prioritize each day. My wife, Great Britain and learning something everyday (with a plug for the Open University) got a mention today. When I was eleven or twelve I pencilled in all the counties of England, Scotland and Wales where I had visited – parents divorced and living in Cumbria and Northumberland got that one started, with cousins in County Durham and North Yorkshire, and then trips to Scotland and Lincolnshire, London and Oxfordshire. The rule was I had to spend a night in the county. Before I’d taken a look at the above map (and not taking into consideration boundary changes) I guessed that bar a few counties I had stayed in all: largely as work producing training and information videos has had me on overnights all over the shop (nuclear power industry, manufactures, retailers, Post Office, pharmaceuticals …), and Northern Ireland courtesy of a girlfriend of 18 months. Looking again I think I could add that I’ve never stayed in Essex, nor many of the Welsh Counties (or valleys), a couple still in Northern Ireland and probably a couple in North Eastern Scotland even if I have driven through. I started the same kind of thing on the 98 departements of France and guess that I’ve ‘done’ a good fifty, once again, thanks as much to TV work repeatedly travelling to far-flung, non-touristy destinations for a TV news agency I worked for. I miss travelling.

A few years ago I took up the challenge of posting a photo a day in Blipfoto; I took this one step further and determined, with the need for some criteria for editing a day’s pictures, to posting something ‘to feel good about’ – this task is similar, though potentially more abstract if the idea, rather than the image comes first.

By Jonathan Vernon in Basics of Life, Curation, Memory, Primary Education, Secondary Education on July 28, 2014.
← Pen and ink drawing class at the Jerwood Gallery, Hastings Open and free learning needs to preach to the converted →