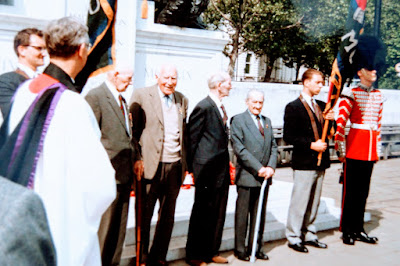 Fig.1 At the war memorial to the Machine Gun Corps (MGC) on Hyde Park Corner, 1991. I’m with my late grandfather – dark suit and beige shoes, fourth in from the right. That’s me on the far left of the line in the glasses holding the standard. (Volunteered about five minutes previously) Marking the 75th Anniversary of the formation of the MGC in 1916.

My love for The OU is restored. Everyone should pick a course from FutureLearn to understand where learning is being taken. You cannot go wrong with an OU lead and designed one of these – some of the others are re-versioned books, leaflets, extra curricular workshops and lecture series, not embracing the affordances of the platform at all.

At the end of each week, which officially run for the five working days of the week, we are invited to reflect on the lessons learnt. A very significant part of this are the ‘massive’ conversations that follow each ‘activity’.

A week of looking at and contemplating the dead from violent conflict I conclude that ‘war breeds hate; hate festers and breeds war.’ Unless the population is wiped out, or dived between the conquerors. Or unless the conquerors stay put – the Normans eventually subjugated England and Scotland and 1000 years on some of them still rule and own the land.

Responses to hatred are diametrically opposed: forgiveness and peace, blame and violent conflict. Has humankind moved on that far from the tribalism of one or two millennia ago?  If young men, the typical combat soldier truly understood what could happen to them would they still go? It applies to every kind of risk, and testosterone fuelled it is more of a male thing? This willingness to take outrageous risks believing that it ‘won’t happen to them’. And of course, commemorating ‘our glorious dead’ and ‘returning heroes’ risks celebrating war rather than being a period of reflection and commemoration. A veteran of WW1 my grandfather never used the term ‘heroic’. Do young people joining up think that if nothing else, wounded, or dead in a coffin, they will at least come back ‘a hero’ – making it OK? And yet, however frightful, violent conflict remains a way that peoples, people, cultures attempt to resolve their differences.

It’ll continue until the world’s resources and ‘life chances’ – are fairly distributed. I feel the awakening of a burgeoning political sensibility that may wobble towards republicanism and socialism.

By Jonathan Vernon in world war one on November 15, 2014.
← Language learning with augmented reality Learning … at the point of sale →