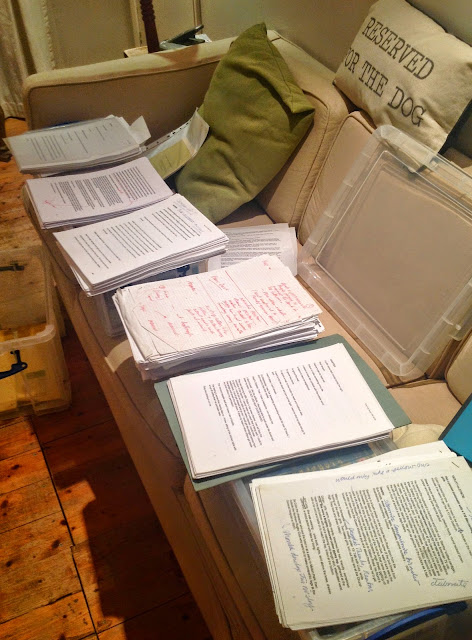 Fig.1. One box from the garage: Five/Six project to work on here 😦

Thank you SWF Fall 14. [Start Writing Fiction. An Open University ‘Massive Open Online Course’ or MOOC that run from October to December 2014 on the FutureLearn platform]

A MOOC on writing fiction has rekindled my desire to be a published writer for the eighth or ninth time in four decades.

Writing in 1991/2 with a further burst of activity from 1996/8 and another from 2001/2006 and abandoned since 2008 I am glad, though daunted to be looking at drafts of novels and of screenplays that I just dug out of a lock up garage over 10 miles away. There’d be more if I could read floppy disks and ZIP drives.

These piles are stacked carefully enough, though some were tipped out of arch-level files when I started my OU MA in Open and Distance Education in February 2010. Here I am back again, as if these last five years have been something squeezed from me like the last teaspoon of paste from a tube of tomato purée.

I am thrilled to see a TV play called ‘Sardines’ – a farce in which some eight characters all end up hidden in the cupboards or under the bed of the same man in a penthouse flat in central London. I am gobsmacked to find variations something called ‘Form Photo’ which charts the relationships of one man from the age of 17 to 57 … mostly teens, with some first loves in his early teens. This is, I think, the one I am now turning to.

Also in front of me is the manuscript I may have given 18 months to – a typical time span, 18 months and 300 pages and 100,000 words. Working title ‘Journey To Work’ because the premise in 1996 was that a character wanted a car that would drive him to work … i.e. a self-driving car. It is not about the motor industry (although I was doing a lot of work for Land Rover at the time). It also has the title ‘Fifteen Roads to Nowhere’ about this guy who sets out on this mad quests: the car thing, a relationship with such enthusiasm … eventually he takes a bet to drive, or be driven by this homemade car across 100 miles of English rural and urban landscape. So there’s that one. 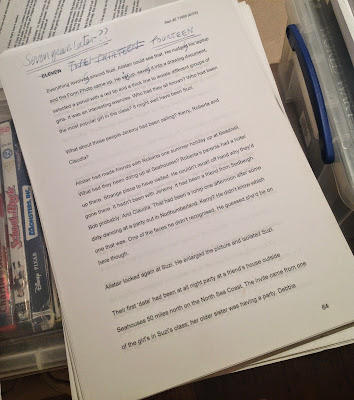 ‘The Contents of My Mind’ was an effort to explore how a person’s mind is stored digitally after their death and in this instance is put into the brain of someone who had been in a coma. You end up with a hybrid horror of a person trapped in a body that isn’t theirs that also enforces a new way of thinking and doing on them. Toss! It went to the BBC, was read and returned. 2004 or so?

Hardly a novice writer then?

Always a novice writer. Even should I have the good fortune to be published eventually I will doubt what it is that I do or have done. My sincere hope, as I return to a commitment to writing fiction after a long break is that I now have a better idea of what it is I do, what makes this ‘chef’ how it is that I toss the ingredients down and pull out a meal that is enjoyable. A short film broadcast on Channel 4 that I wrote, directed and produced is my only broadcast credit; I have not been published outside a school magazine. 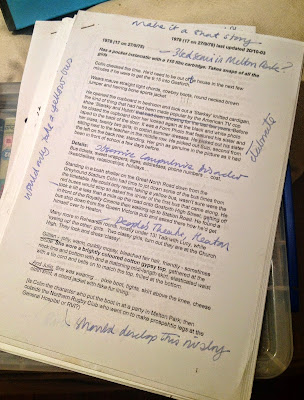 Editing that destroys what I write isn’t the way to write – it becomes like writing by numbers. I have plenty of examples of that too, where I have tried to write as I believe I am required to write. I did this with a 12 part historical TV series that I read today and it is about as thrilling as a telephone directory – there is nothing of me in it. ‘The Little Duke’ could be retuned wearing my new head. 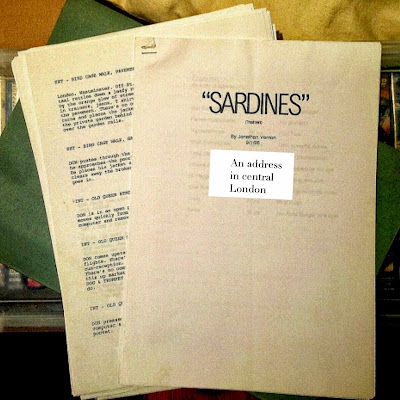 Far better the outrageous, Tom Sharpe meets Henry Miller, of things like ‘Sardines,’ even ‘Exchange with a Frenchmen’ … the treatment of which I have seen kicking around somewhere. I cut and pasted hundreds of strips of papers into a long scroll. I think, as I am now doing with other work, that I am starting to know how to construct that prose.

I also found the proposal, in French, for a series of false news stories.

I was on the team writing, directing and producing these things for Antenne 2 in 1991. Outrageous. One story even ended up on the news. We told some lie about the French Prime Minister owning a Honda even though she claimed to be wedded to supporting output from French car manufacturers Renault and Peugot. At this time I also spent six weeks on the road documenting the lives of those in the HLMs outside major towns and cities where immigrants had been put. And I wrote a story about an Algerian boy who when stressed turned into sand … All this and I was translating from French to English a kids cartoon series called ‘Chip and Charlie’ from France Animation. 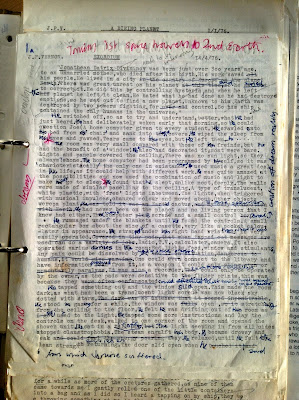 Still in the garage there is the manuscript for a kid’s adventure story called ‘The Time Telescope’, a kids TV series about a time shift device called after the main characters, brother and sister ‘CC and Susie’ and some kids’ stories written when my own children were six and four. ‘Hapless Harry’ comes to mind … a small boy who ‘transmogrified’ into everyday objects whenever he did something naughty. He turned into his dad’s brief case and got taken to the office in one adventure, I remember.