5 Free Online Courses on the First World War from FutureLearn

During the recent course on heroism we were asked to share images of out favourite First World War Memorials.

Born and raised in Newcastle my late mother went to the Art School on the other side of the road, then King’s College, Durham. She often talked of this memorial, knew its history and had done studies of it as a student.

I know Lewes War Memorial as I have lived here for nearly 15 years. As a member of a bonfire society we stop at the memorial every 5th November … so whether there is a centenary or not, we make a lot of fuss about it. This memorial features online where Steve George has pinned every name to an address in the town. This make for very painful viewing as you realise how many households lost husbands and sons to the war.

Fig.3 My late mother and grandfather at the Tynecot Cemetery marking the 75th anniversary of the Battle of Passchendaele (Third Ypres).

If I were to add a couple of other memorials it would be the extraordinary First World War memorial to mariners at Tower Hill with sumptuous stone carvings around the miniature garden where it is set, and the oddly incongruous memorial to the Machine Gun Corps at Hyde Park Corner which shows the figure of Boy David. I was a standard barer at a memorial to the 75th anniversary of the formation of the Machine Gun Corps in which my late grandfather had served … he was there too, age 94.

Fig.4. The Tower Hills memorial to mariners of the First World War

And most recently, at my daughter and son’s school, I came across this extraordinary mural that fills the assembly hall of the old Grammar School. Surely this achieves its goal of creating a lasting memory amongst students? 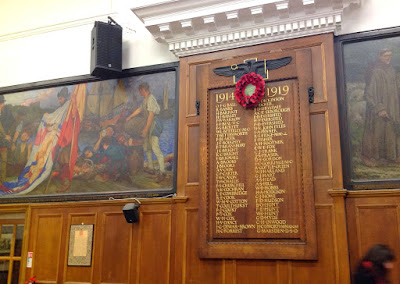 Having completed all but World War 1: History in a 100 Stories my sincere suggestion would be to set aside seven hours a week. I aim to do an hour a day during the week and complete on Friday. I generally achieve this unless I get deeply engrosses in the conversation, or have to go over a point a few times to understand it. Maybe 45 minutes every day then. Skip the discussions and these are easily done: then it becomes akin to watching a bit of TV and reading a few leaflets – not the same as testing your thoughts, and having your ideas tested, turned around, built upon and altered.