“When I was fighting fit, mind.” 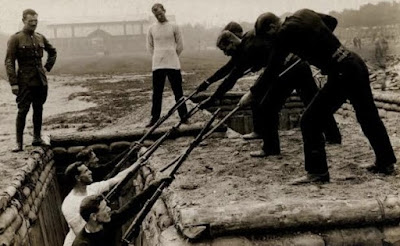 This is a line my late grandfather used all his life. He had many sayings – all from the First World War. Another one was “your teeth are your pearls” and “you can shove it where the monkey puts its nuts.” He was active into his mid-90s, attending the 75th anniversary commemoration of Third Ypres, the Battle of Passchendaele in July 1992; he was 96. He only stopped driving when he was told his poor eyesight had gone beyond correction age 93. And until late 1992 he walked a couple of miles back and forth to his daughter’s house to mow the lawn, clear the leaves from the drive and gutters … or change the oil in her car.

A passing curiosity about how they got the men fit during the First World War and blow me I find a book came out on it last year … and there’s even a museum all about it. The ‘Royal Army Physical Training Museum’ in Aldershot, England.

I suppose the next step would be to give some of the training ago in my local gym: boxercise might be the closest it gets. I can’t see there being bayonet training allowed. What did soldier’s say about training at the time? Some hated it? Some loved it? My grandfather likened his Sergeant Major to Oliver Hardy of ‘Laurel and Hardy’ – said he was a jovial character who used to bring some of his children down to the parade ground and the soldiers would give them rides on their shoulders! That’s not the image of physical training in the army you usually get on films about soldiering.