Taking more ‘risks’ is better than taking only one.

Not quite 24 hours, more like 18 hour, but much of this has been spent in the company of my Kindle. 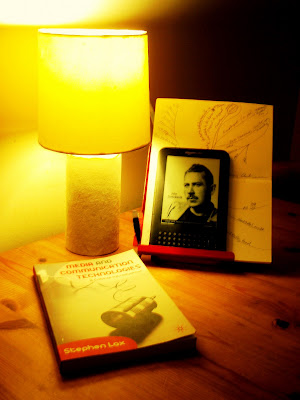 Had it been back lit I might still be in bed. Once upon a time (twenty years ago) when my bed was my own I’d wake, read for an hour, then go back to sleep. Because I have to get up, I do.

It amuses me that I bought the stand it is resting on in 1982. My girlfriend at the time thought I was wasting my money. Here it still is. It pays to by something that will last.

The A5 Pad of Cartridge paper is meant for drawing, though it sometimes will double up for notes and mind maps.

Had I a Kindle at the time I would have the Kindle version of Media and Communication Technologies. For H800 I have read the introduction and conclusion and can draw on my notes done the old way: into a notebook, then typed up and blogged or stores in the MyStuff eportfolio.

The only book I have on the Kindle is this.
Excitement and ease of use has got me through five chapters in as many hours. 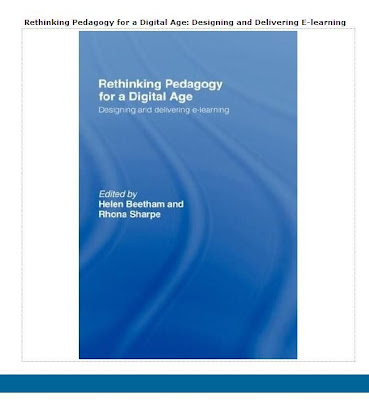 The highlight tool is spot on, as is notetaking. I would have preferred a stylus, as my old PDA, but guess this would make it more expensive. Low cost is a factor (at least low enough).

The default images are a thing of joy and beauty. I recall seeing Mark Twain, Jane Austen and various pages from illuminate manuscripts and pages of animals from Victorian engravings.

I subscribe to How to Change the World on a 14 day trial. It starts with this. A lecture by Randy Pausch, age 48, an inspirational educator … months before he dies from cancer.

I’ve watched this through once, and will watch it several times over and take notes before I am finished. Randy Pausch has some inspired things to say and share. It will reduce you to tears and inspire you to be a better person and do great things.

On the inappropriate early use of technology 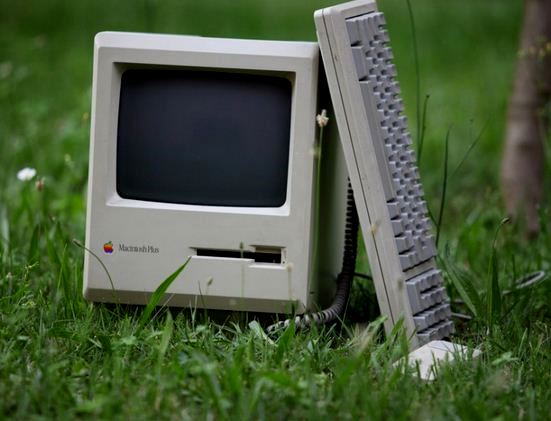 A fellow OU MA student blogged about her experience of the failed introduction of a video conferencing system into a number of primary schools in England in 2003.

It repeatedly overwhelms me with sadness that the boundary between professionalism and amateurism is so thin.

I mean no disrespect to schools, or some schools, as it applies to many other organisations (not least hospitals). There must be ‘user needs analysis,’ or put more bluntly, ‘ask the teachers!’

The end-user is the success or failure of a project. Answer their needs, solve a problem, create an opportunity … and do it for as little cash outlay as possible at first.

‘Creativity before capital’ as the change leaders at Unipart Group of Companies said in the 1990s.

i.e. do what you can to experiment and trial with anything new, change, reorganization or kit, before you commit.

Hire kit for a long weekend and give it a go. ONLY after needs analysis, feedback of this trial period should an organisation go ahead … and even then the kit should be initially on some short term lease so that it can go back if it proves to be the wrong kit, or the right kit at the wrong time, or should wait until teachers (in this instance) have been trained.

The business has a ‘social responsibility agenda to meet (often) and will genuinely help out, for example, a trip to use their video conferencing set up between locations around the world. just an idea. If these experience if a good one, then perhaps the venture is worth the expense. You may find that using this companies conference room once a quarter about satisfies what you wanted in the first place anyhow. You may realise that there is a far simpler way to do it … video an event and then share the content remotely at a later time. Did it have to be synchronous? A parent might be winkled out who is a tech expert who will do some of the work for free. etc: Start the journey tentatively with eyes and ears open.

A decade later multinationals were using it regularly via intranets; it is still under utilised. It can be the tail that wags the dog as if it was the CEO’s baby others feel an obligation to use it even if on reflection it proves to be a waste of time.

Don’t you think schools, on the ‘Diffusion of Innovations’ Rogers (2005) curve ought to resist being early adopters, or even majority adopters? That it pays to be the ‘laggards’ both on cost, technical advances and acceptance of the technology in the wider community?