This covers meals for a five day though missing the porridge oats. Breakfast is either porridge with soya milk, grated cinnamon and a drizzle of maple syrup or spinach and cherry tomatoes on toast. Lunch is often an Asian soup based on coconut and yeast flakes in a vegetable stock with garlic, ginger, and any combination of veggies: carrots, cauliflower, brocoli, mini corn. Evening veggie burgers made in a variety of ‘flavours’ with chutnies made from dates, or sun dried tomatoes, or pasta and pesto. Pesto typically basil based, but often might include avocado. Parmesan replaced successfully after much trial and error with a mix of roast pine nuts, pistachio and cashew nuts put through a spice grinder with yeast flakes.

Experimenting with recipes from a number of books – some more challenging than others.

This how I left my first blog. Jonathan.Diaryland.com

It barely scratches the surface of the memories a brain can recreate. I tried. I have in there repeated efforts to recall the very first things I could ever feasibly have formed as viable memories: or were they words and images put into my head by my mother much later? I also noticed that in the comments I have two years of conversations with the now published author Catherine Valente and, would that I could verify it, a short exchange with Norman Mailer.

It feels like landfill: there’s so much stuff in there rotting away. Though it doesn’t, it’s digital. Closed because while I don’t give a monkey’s about writing on everything I have done, thought about or think where people can be identified it could cause embarrassment and offence. It took me a few years to realise that if I was receiving 200+ views an hour some of these people might know me.

No one I knew ever, ever said they were there. Not for a long time.

Perhaps they knew I’d close it down if they let on? I tried to obscure names and locations but that just got very confusing. I held a mirror along the Pennines and set everything that had taken place in Northumberland in Cumbria and vice versa. For people’s names I tried initials, so taking  ‘JV,’ for me is a giveaway, so I ‘cleverly’ decided to change names by one letter in the alphabet, so ‘JV’ became ‘KW’ and I’d go by he name ‘Ken,’ for example. I knew a lot of Sallys who all became ‘Tamsin’ or ‘Tabatha’ which threw my head as it immediately had me constructing different fictional personas for them – just as well? That’s what writing fiction is about, embellishment? ‘Ken and Tabatha’ sounds like the relationship between a Barbie doll and a Sasha doll.

There were a lot of ‘Js’ too for both boys and girls from the 1970s and there is a limited choice of ‘Ks’ to go with.

Only a few years later bumping into old friends from home and school have they said they knew all about ‘X’, and ‘Y’ or looked at the drawings I did of ‘K’ and the photo of ‘T.’ The greatest shock was getting into a conversation with my ‘petite amie’ from my school French Exchange when I was 17 – 33 years after we’d last seen each other (two years ago). I’d posted a teen sketch I did of her and wrote up in detail how we had behaved.

This content is of far greater value to me not ‘cleaned up.’ I keep it closed though I’m drawing upon it constantly as it contains a substantial part of the diary, verbatim, that I kept from the age of 13 to 28 and a great deal of stories that I wrote drawing on some of those experiences. These are finding life once again thanks to the OU’s FutureLearn course ‘Start Writing Fiction’ and, once again, a close writer/editor relationship that has formed. It is, should I ever get published, a sound example of the value of keeping a ‘notebook’ as that diary, even as I conceived it age 13 is a substantial ‘writer’s journal’ that follows life through the eyes of a boy growing into manhood, taking an healthy interest in the opposite sex and after some pain and love, finding and marrying ‘the one’ – and now celebrating 20 years married and soon to celebrate 25 years together.

What I find touching, then and again today, is that supportive friendships form with fellow writers or readers or editors that is enormously encouraging and guiding; people want my words. I feel like a stand up comic who loses his audience from time to time, then gets hit by a soft  ‘carrot’ or a bendy ‘stick’ and subsequently re-adjusts his ‘voice’ to the one they want to hear.

Marking five years since I started my OU degree and an OU Student blog almost coincided with a logical, deserving step into the legitimate world of e-learning as I completed an ‘in-tray’ exercise ahead of a second interview. As I prepared to mark this ‘Five Years’ (a totemic time period for any David Bowie fan) I thought I could be announcing this literal step onto a ‘platform’.

Though I also had in mind my response to it not happening:

I didn’t get the job.

Life has moved on.

I am writing with fury and loving it. My only regret? The need to sleep.

Playtime in the fisherman’s boat

Now there are two, but there was only we could play in at our backdoor when we stayed here as children. A second was upturned and full of nettles. There is film of a five, six, seven, eight and nine year old sitting in this boat: cousins. 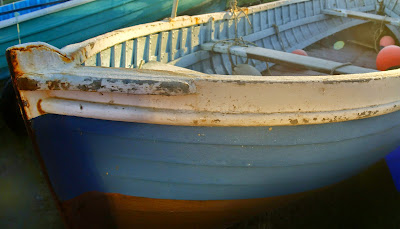 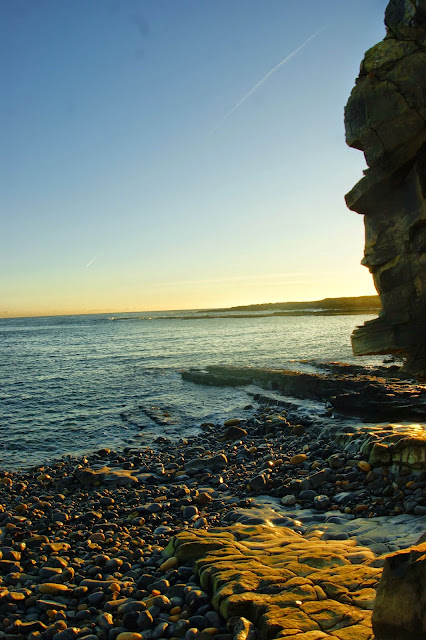 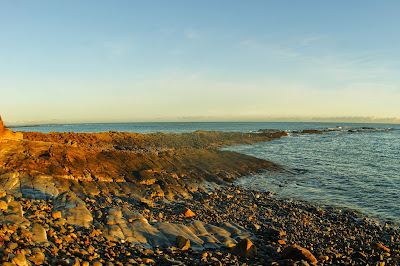 Favourite places to explore a  child, to watch the waves, to catch the light of the Longstone Lighthouse, to search for eye-catching pebbles.

Searching for treasure on the rocks at Beadnell 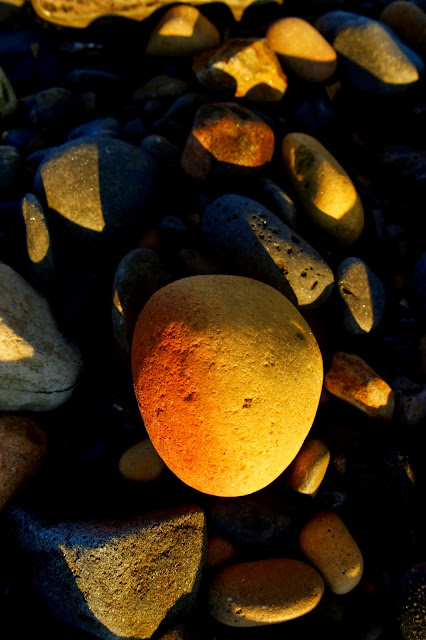 Fig.1 The pebbles on the rock beach, Beadnell, Northumberland

Head down to watch you step on slippery rocks gives you the chance to hunt for treasure. As a boy I returned home with interesting stones and fossils. Forty years on I see what could be a piece of ripening fruit, an ammonite and a stone covered in tiny balls of frozen water which won’t last ten minutes in the late December son. 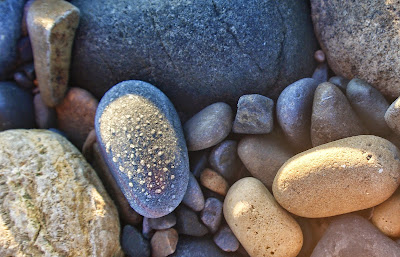 The value of using a 3D timeline in writing

Constructing a length piece of writing – over 50,000 words and need to stick to the chronology of events, at least in the first draft, I have found using the timeline creation tool Tiki-Toki invaluable. You can create one of these for FREE.

Over the last few months I’ve been adding ‘episodes’ to a timeline that stretches between 1914 and 1919. You get various views, including the traditional timeline of events stretched along an unfurling panorama. However, if you want to work with two screen side by side the 3D view allows you to scroll back and forth through the timeline within the modest confines of its window.

Putin comes to Lewes and goes off with a big bang 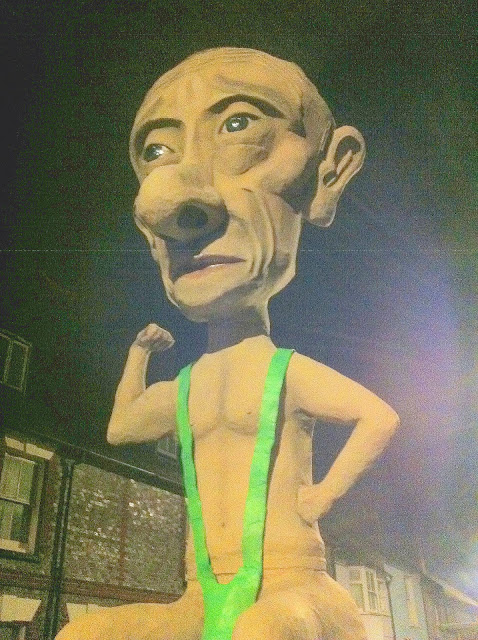 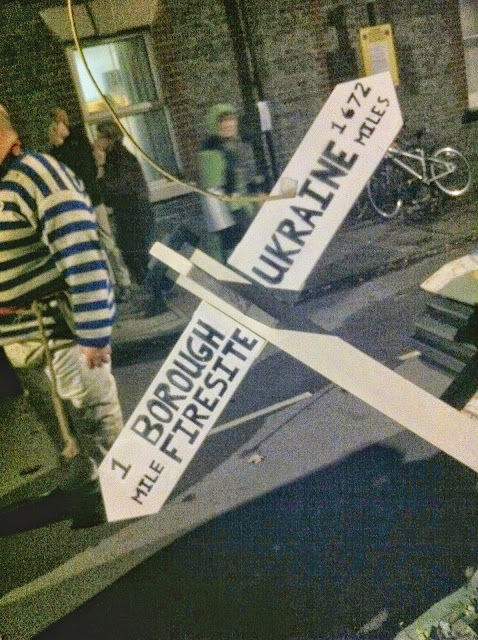 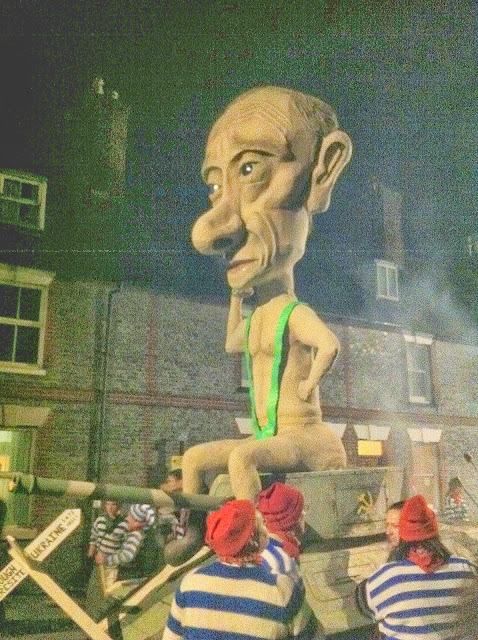 Marking the 5th of November each year the bonfire societies of Lewes make controversial floats that are filled with fireworks and exploded at the end of the evening. I’ve spotted David Cameron, the Regional Chief of Police and Angela Merkel before. This year I came across President Putin in a mankini astride a tank.

On dealing with a housemite allergy

My habit when travelling is to take at least my own pillow, even a duvet and a mattress cover; this because of asthma and rhinitis and a fairly severe allergy to house mite dust (their faeces). I have on long stays ended up sleeping in bathrooms, on balconies, even in a tent in the garden. Most frustraingly with two more nights to go on what is otherwise turning into a transformstive, even pivital writing experience, it feels as if I have had a rubber tube shoved up my left nostril and a sack of sand liberally sprinkled with pepper, had been poured into my head then packed into place with the handle of a wooden spoon. I’ve been stuffed. The result is miserable, a face that aches, earache, a,igraine lije headache and a left eyeball that feels as if it is swimming in chillies.

The swollen soft membranes of my mouth and sinuses, even if I evacuated to the sea, may take anything from a few days to a few weeks to clear; work is severely compromised and my mood has sunk. A shame as the lessons and experiences I am having with my writing are hugely promising.

Fig.1 All images too disgusting to share … so here’s a diagram instead!

Unusual that during a hospital visit the consultant asks me to make myself ill and return the following week for a biopsy. This is testing for ‘Lichen Planus’ – an unpleseant ulcerating of the soft tissues of the mouth. Breakfast the morning before will therefore be: a packet of HulaHoops, a chocolate HobNob, Marmite on toast with tomato ketchup, a spoonful of heated up Chicken Phal, cheap ice-cream say a ‘Feast’ and a small glass of Spanish lager, or Guinness or Newcastle Brown Ale. I can then rinse my mouth out with a specific brand of mouthwash that contains some chemical that causes a reaction.

I predict ulcers, a large blood spot and what are like raised, scratch marks inside my mouth. If I really eat the above I think I’ll be sick. Come to think of it, if a handful of HulaHoops does the job why bother with the rest?

I will have some prescribed pain relief and an anaesthetising mouthwash to use straight afterwards.

Turn on Radio 4: leave it on and listen from the other side of the kitchen, bedroom, sitting room or bath. Take notes when you hear something interesting. I’m now well through a book on research done into happiness mentioned on Saturday Live and am starting to make ‘Homefront’ a daily fix. Blog about it and discuss: that’s the e in e-learning. That and having the book in eBook form. And quite a bit of Radio 4 is OU anyway: The Bottom Line and that one on statistics come to mind.