On the way in I came across these guardsmen, eight or nine, lying in a shell-hole as though they were asleep.

(They were Gough’s XIV Corps. Guards. From the 38 Division commanded by General Lord of Cavan. They’d been held up on the west bank of the Steenbeck. Gas had been used by Jerry on as attacks had been made on Houthulst Forrest)

Get a dose of that and your lungs were ruined.

You could see down this path from Courage Post right into the forest. It was facing the wood where Jerry was. There was no barbed wire, just all shell-holes and mud.

It had been raining heavily since the beginning of October.

The ground was like porridge. Parts of the front and turned into a lake. Simply getting to a front position was exhausting as you had to wade through this ooze and negotiate the rims of shell-holes.

(The rainfall in August 1917 over Northern France and Belgium was twice the August average. In fact, there were only three days that entire month when there was no rain).

Streams pushed their way through the crumbling banks of the craters and linked into impassable lakes of liquid mud. On the surface of the water there’d be an iridescent smear of oil. or it was green from gas on a puddle.

If you saw a film of red streaking the surface it didn’t take much imagination to guess what else was down there.

And the smell. It made you wretch.

There was no getting used to the stink from all the mess, body parts, rotting away … a lads inside, heads, limbs, hands … you can’t imagine the horror of it.

Even if you buried them it didn’t take much to blow them out of the ground.

Jerries, Tommies, mules and horses. The only thing that lived out there were rats and they had a feast of it.

This was when I heard this kid in this dung heap by the stream shouting for his mother.

I don’t know if he’d been hit or fallen in but it stopped me in my tracks.

There was a bit of an embankment down to the stream. When it rained it was like a river, full of frogs and all this filth. On the other side there was this shell hole. All I could see was his head and shoulders sticking up above the mud.

They quickly filled with water which formed a muddy sludge of body bits, broken equipment and what not. This was behind the pill-box they named Egypt House 200-300 yards short of Houthulst Forest.

I leant down to get this lad, mind you with all that mud I might have slipped in myself. The remnants of the Belgian army were nearby.

There’d been this attack to try to get around Houthulst forest which the French had taken on the 9th October. Doomed to failure from the start. That July the French had held a short piece of the line between Boesinghe and the Yser after which the remnants of the Belgians took over.

“Mother, mother.” He was saying.

So I grabbed this lad’s shoulder-belt and told him to help himself.

“Kick man, kick. You’ll have to get yourself out of this one.” I said.

He kicks about and I get him onto the duckboards.

You couldn’t stand around out there with all the shooting going on.

And off I went.

George Wannop was killed the next time he went in

Fig. 1. Passchendale was a quagmire

Not like trenches. There was no communication. And you could only walk about in the dark.

(Ypres is at sea level. As the landscape is flat farming is only possible with extensive drainage. The Belgians let it flood when the Germans invaded, then with all the shelling, the place was just a morass of mud. The surrounding ridges are nearly all under 50ft high – but it was dry and gave a view of the area. That was what all the fighting was about).

“You had to watch the gun that it didn’t freeze; it was water cooled”.

We’d cover the barrel with bits of sandbag and an oil sheet – anything you could find.

You couldn’t help but get a bit of dirt on it. The conditions were absolutely serious, almost unbearable. We used to wrap out legs with sandbags right up to the knees. There were no rubber boots or anything then; it was boots and puttees.

This Lance-Corporal George Wannop was in charge of the gun.

He was only 19, another one who’d joined up under age.

It would appear that during the night when they’d given the gun a try, given it a few bursts to see that it wasn’t frozen; it jammed.

You had to do that intermittently, just to give it a burst to reassure yourself that it would work.

Wannop couldn’t get it going; it wasn’t frozen.

So in the dark he changed the lock.

We’d been trained to change parts wearing a blindfold in Grantham.

There’s a spare lock in the case. It’s a square piece of metal with a striking pin in it and its worked by a crank inside. You lift the cover on the gun, ease it back, pull the crankshaft back, the leaver is here, ease the gun out and lift the lock out.

(75 years on Jack goes through the precise actions with his hands. His thumbs are like spoon, pressed flat from being pressed against the dual firing buttons of a Vickers Machine-gun)

Wannop did that, all in the dark, and put in a new lock. He tried the gun.

OK and covered it up.

There’s a heavy fog the next morning when it starts to break daylight.

This officer, he could have only weighed nine stone and one or two officers came prowling around. He was a little worm of a man, not more than nine stone, with a great heavy coat on. You’d never get officers coming round on a clear day; this one was a complete stranger to us. They had a chat with the corporal.

“Let me have a look at your spares,” asked the skinny one.

Wannop got the case out which held the spares and low and behold there’s mud and dirt on the lock they’d been fiddling on with in the middle of the night.

He was reprimanded for a dirty lock.

Not only was he reprimanded, but so was I because I was responsible for the two guns. I had my papers going through for transfer so the last thing I wanted was this kind of bother.

“When it broke daylight we were going to examine the gun,” I said to the man. “To see what the fault was, fix it and clean it.”

He’d hear nothing of it. Another “B” that wouldn’t listen … and it was him alright, Montgomery.

He was just a weed of a man … skinny legs there, but no doubt it he was clever with the Eighth Army.

Captain Williams was damn well annoyed about it.

We all resented these men coming to the Front Line. They hadn’t the first idea what it was like. They’d be seven or eight miles back billeted in some French châteaux while our lads were being knocked to pieces. We didn’t lose any pay. Williams reassured me that my papers would still go through.

“Jack, they can keep the dog’s leg and put it where the monkey puts its nuts!”

Wannop was a great tall lanky lad. He was disgusted. And I had my papers going through. I was worried it would be on my record and effect my application. Wannop was a quarter mile away from me.

George Wannop was killed the next time he went in. He was killed on the 29th of October.

It was a spot in Houthulst Forest.

He said to me he was a farmer’s son, actually his father was a dock labourer from Silloth, Cumbria – but never mind that. You didn’t get many saying their father or mother were in domestic service either.

(George had six brothers and sisters: Isabelle, Thomas, twins Margaret & Joseph, Dinah J who was my age and a younger sister Sarah).

Years after the Second World War, Norman Taylor, my brother-in-law, who lived at Ryton, bought an autobiography of Montgomery

There was a picture of this skinny little fellow. 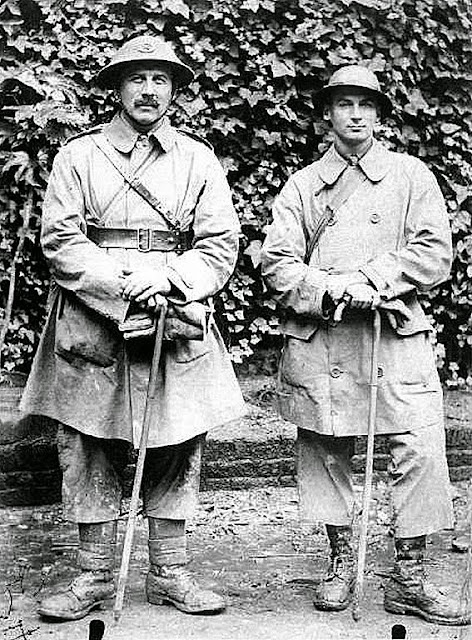 Fig. 2 Montgomery on the right here.

Montgomery was in Ypres at the same time as me. He was a serving staff officer in the 2nd Army under Sir Herbert Plumer. (47th (2nd London Division)  Montgomery had been moved from Boesinghe on the 7th June after the mines blew under Messines Ridge. He then went on towards Pilckem Ridge, Langemark, Poelcapelle and Houthulst Forrest in October 1917.

I’m sure Montgomery was our brigade machine gun officer or director of guns. 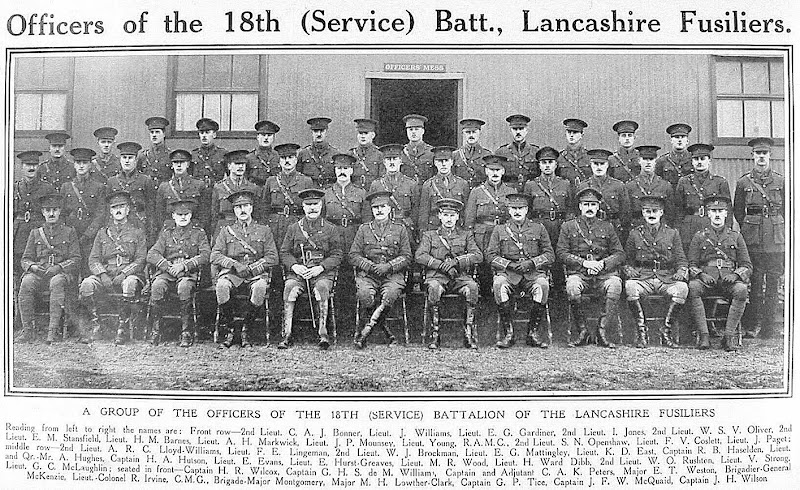