8 tips to improve your writing from Kurt Vonnegut 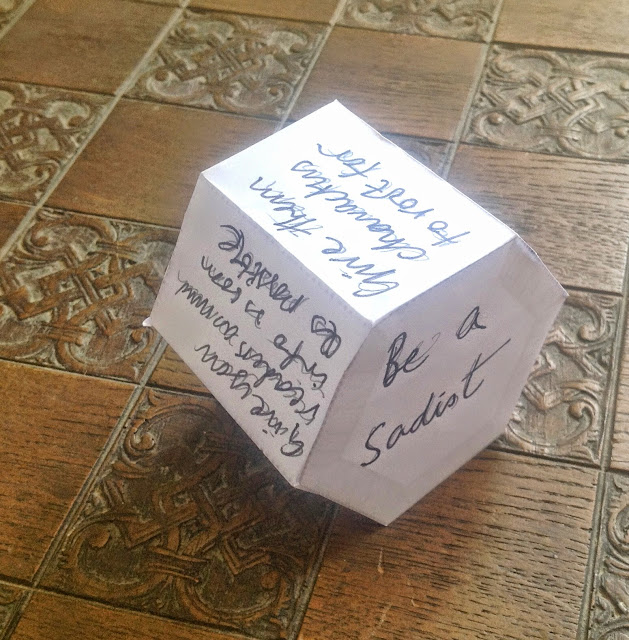 Which I interpret as conflict, as creating a mess and seeing how the characters behave and what lessons they learn or do not learn as a result.

Unable to retain more than one piece of advice in my head for long I’ve created this octahedron with the eight tips Kurt Vonnegut gives. This way I toss this over my desk as I write every so often, at least every time I reach for a sip of coffee. I can then check whether or not I am doing as required. 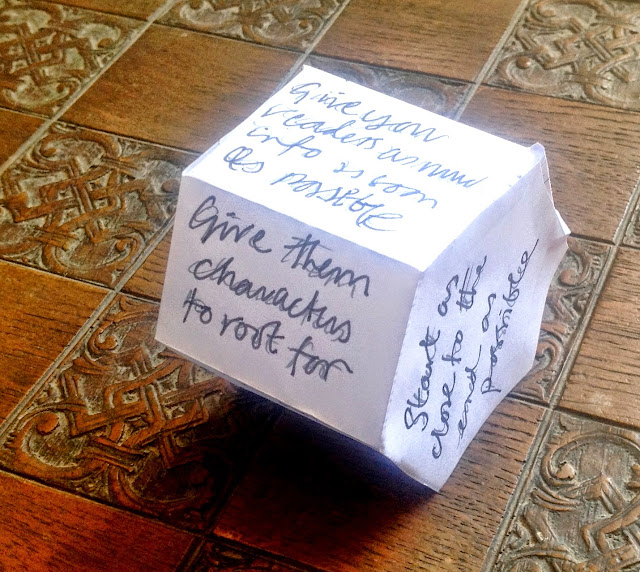 2) “Give your readers at least one character they can route for.” Kurt Vonnegut.

This is all about creating believable characters: the good, the bad and the ugly. With a mixture of traits, and most having something likeable. 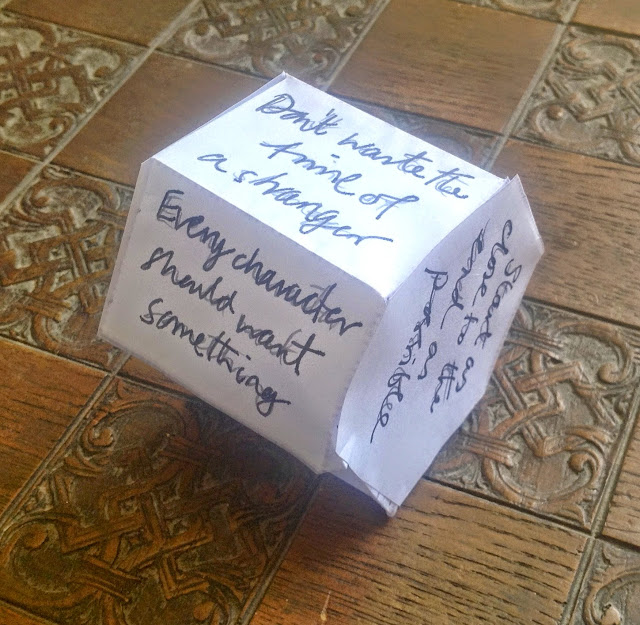 3) “Don’t waste the time of a stranger.” Kurt Vonnegut.

Which I take to mean avoid the dull and the obvious in settings, choice of words and phraseology. Take risks. Surprise and thrill them. It can be how you see the every day in a quirky and original way, and not simply having wacky characters and locations. 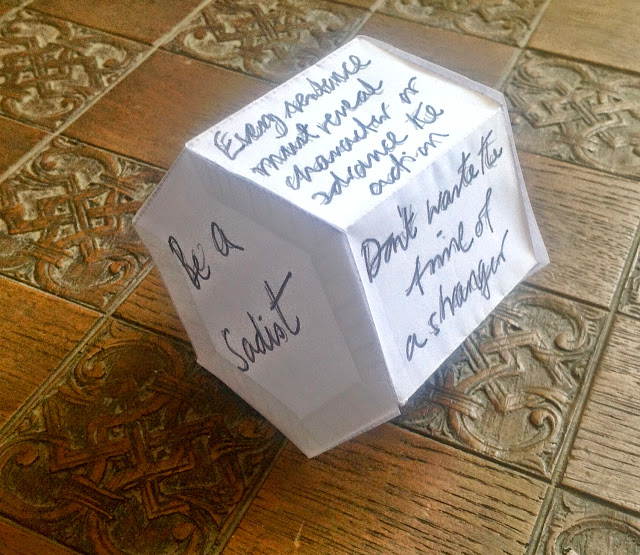 4) “Every sentence must reveal character of advance the action.”

Kurt Vonnegut. No more indulgent ‘jazz writing.’ Think like a professional writer and make the words count towards something. 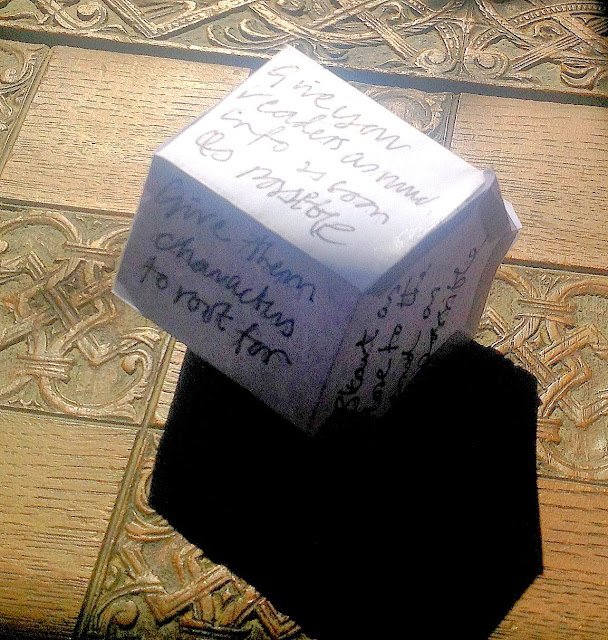 Never play that game of ‘twist in a tail.’ Writing stories is not the same as telling a joke and writing a sketch. Hitchcock used to talk about telling the audience there’s a bomb, then spending the story waiting for it to go off. 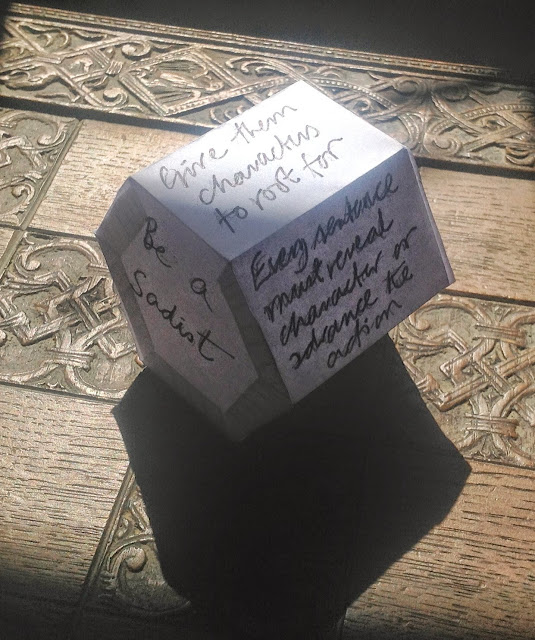 6. “Every character should want something. Even if it’s just a drink of water.” Kurt Vonnegut.

Which I take to mean avoid having characters as props to the protagonist: they too want something from life. Show what it is and have it in conflict.

7. “Start as close as possible to the end.” Kurt Vonnegut.

Which I interpret as meaning getting as close to the climax. Don’t hang back, and certainly avoid constant backfill and back story that with each draft takes you away from the big idea and the big events of the story.

Please one and you please many. Try to write for many and you’ll either get in a terrible tangle or produce mud.

A writer is only a writer when writing. The rest is marking time

‘Reading is a skill: you have to be taught how to do it.’ Nabakov

I read a review by Martin Amis each time I go to the loo; which is often given the column of vegetable matter and brown rice that I’m consuming.

A 1996 review of the film by David Cronenbourg with more reference to the book on which the film was based that was published in 1971.

I’m so ill read I didn’t even now Ballard had written ‘Crash’.

Everything about him as an author appeals to me though given how his writing style, especially his ‘early style’ as described by Amis. The local library does not have ‘Crash’ – if you have a copy do send me one. Address on request. Was I time I’d order anything on a whim from Amazon, tuck into my credit card; was I time I’d so the same in the bowels of Blackwell’s in Oxford.

I like the way it is explained to us that the main character, James Ballard, does one thing in the film and another in the book .. a book that preceded the firm by 25 years.

‘Under the sway of a ‘benevolent psychopathy’, a ‘new logic’, the entire cast surges eagerly towards an autogeddon of wound-profiles and sex deaths.

I like the idea that crash deals with ‘obsession’, I must of course, having read all of this, get a copy of ‘Crash’ – from the library I hope.

‘Crash emerged from a background of surrealism, cultural activism, hyper-permissiveness and lysergic acid.’

On being a A novelist or a B novelist.

‘Reading is a skill: you have to be taught how to do it.’

Nabokovian advice. The only things that a good reader needs are imagination, memory, a dictionary and some artistic sense.

The library doesn’t even have Kurt Vonnegut

I found a J G Ballard though (not crash). I’m after ‘Les Particules elementaires’ by Michel Houellebecq too.