Learning, or rather teaching as a form of education is moving towards greater fluidity and liveliness in the relationship between the academic (author/lecturer) and the student. 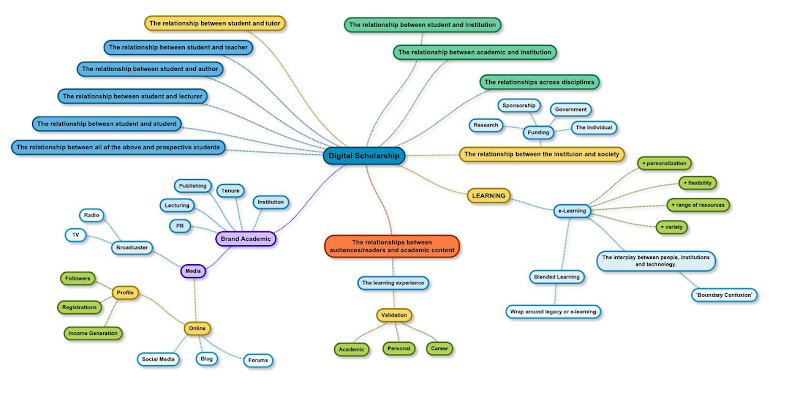 I’ve drawn on ideas from the Masters in Open & Distance Education (MAODE) that I have been studying with The OU since February 2010. Also ‘The Digital Scholar’ by Martin Weller and ‘Preparing for blended e-learning’ by Chris Pegler.

I come to the conclusion that learning, or rather teaching as a form of education is moving towards greater fluidity and liveliness in the relationship between the academic (author/lecturer) and the student.

The model education should look to is one developed in business, something I stumble upon studying OU MBA Module ‘Creativity, Innovation & Change’

Drawing on a business model, the development of a more organic structure that is less hierarchical, as envisaged by Henry Mintzberg (1994), seems appropriate; it complements what authors such as John Seely Brown say about ‘learning from the periphery’ too. Mintzberg talks of an adhocracy, doodle here when I was making hand-drawn mind-maps during revision for an end of module exam (EMA).

One could also draw on a simpler organic structure developed, again in the MBA arena, by Charles Handy. 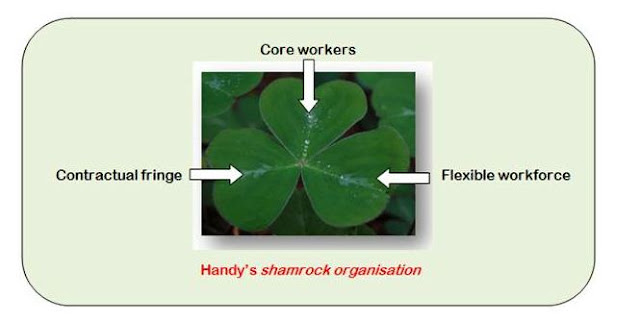 The advantage of a flexible organisation is that it can react quickly to a change in its external environment.

Since the 1990s, firms have examined their value chain and tried to reduce their workforce to a multi-skilled core, which is concerned with the creation or delivery of a product or service. All other supporting, non-central functions are outsourced wherever possible to the periphery.

Charles Handy suggested, however, that organisations do not consist of just the Core and the Periphery, since the periphery can be subdivided.

He calls this a shamrock organisation:

However, the model I constantly turn to is the Activity System of Engestrom (via Vygotsky).

which also has its organic expression, not dissimilar to the Mintzberg concentric organisational plan and John Seely Brown’s ideas of learning from the periphery: 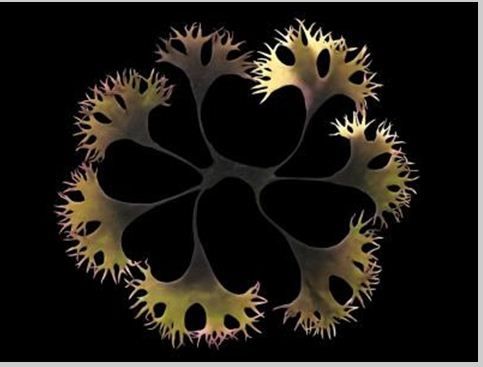 In the spirit of digital scholarship I’ve been experimenting with using Twitter to share thoughts on more than one book as I read them, highlighting a point and adding a Tweet. The feedback has been interesting, as has been the influx of new Twitter followers, invariable all with an academic or commercial interest in e-learning. 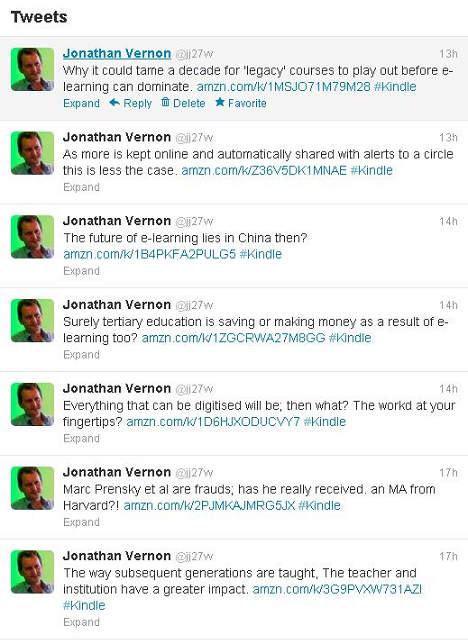 So come and join the feed, though from time to time you will receive tips on swim teaching best practice (how to fix a screw kick in breaststroke and some such) or as likely thoughts on life in the trenches as a machine gunner as we approach the centenary of the First World War.

I’d like to see this offered as an APP or Tool so that digital assets (stuff) or ‘E-tivities’ (Salmon, 2002) are automatically aggregated as a fluid, initial offer. In other words, assets are seen as a way of catalysing a process of exploration.

Why learning in business is becoming fluid and lively – the relationship between the academic and the student has flipped.

Drawing on a business model, the development of a more organic structure that is less hierarchical, as envisaged by Mintzberg (1994), seems appropriate; it complements what authors such as John Seely Brown say about ‘learning from the periphery’ too.

Fig.2. Part of a mind-map created while preparing for a written exam on ‘Creativitiy, Innovation and Change’

The advantage of a flexible organisation is that it can react quickly to a change in its external environment.

Since the 1990s, firms have examined their value chain and tried to reduce their workforce to a multi-skilled core, which is concerned with the creation or delivery of a product or service. All other supporting, non-central functions are outsourced wherever possible to the periphery.

Charles Handy suggested, however, that organisations do not consist of just the Core and the Periphery, since the periphery can be subdivided.

He calls this a shamrock organisation:

The first leaf of the shamrock represents the multi-skilled core of professional technicians and managers, essential to the continuity of the business

The second leaf Handy calls the contractual fringe, because non central activities are contracted out to firms specialising in activities such as marketing, computing, communications and research

The third leaf consists of a flexible workforce made up of part-time, temporary and seasonal workers.

Brown, John Seely (2007) Exploring the potential of Web 2.0 techniques and applications in higher and distance education, informal and lifelong learning

Perception,  Intuition, tacit knowledge and apprehension of Eastern cultures have a role to play. (Nonaka and Takeuchi, 1995)

Logic, precision and evidence has been the way of the West.

N.B P56 the unconscious has a role to play.

Plasticity: though as metaphors go I  prefer paths through a wood, rather than water on a jelly (de Bono). Telegraph, to analogue telephone, to high-speed internet broadband might be even better.

What we see is very much affected by what we expect to see.

P57 (how does this impact on a trial several years after the event?)

We recreate images of past events anew on each occasion. p57

i.e. No one has a photographic memory. People’s recollection of events change years after.

And we find it easier to recall memories laid down in a particular state. e.g. recalling a dream can be as easy as positioning yourself in bed as you were when you had the dream. (Prepare for an exam by revising and testing yourself in exam-like conditions?)

p62 Our memory of how to do things is often tied to the situation in which it was learnt.

N.B. The importance of intuitive decision-making that can assimilated information that is too complex to verbalised.

For the next week keep a record of any intuitions and hunches you have, and note what led you to recognise them.

Keep a diary of intuitive judgements and decisions you make, and subsequently note whether or not you were proved right.

P76 ‘It seems we have a strong tendency to apply rules mindlessly, which means we easily miss new approaches.

P78 People perform close to their labels. Research shows. (So never label a person or child).

P84 the unconscious mind often fails to match, particularly where information is incomplete.

Claxton, Going Beyond cleverness: how to be smart without thinking.

I am listening through a 28 minute audio on creativity, innovation and change.

This is part of the OU MBA programme, but for me an elective 30 credits as part of the Masters in Open in Distance Education having already taken H807, H808 and H800.

I need a transcript.

I would skim read it, then listen once.

Instead, on the third listening I find I am writing a transcript, bullet points becoming sentences, sentences becoming paragraphs, those interviewed gaining a picture from Google Images and a resume from the institute where they are currently based.

Where the interviews intercut, I am taking them back to FOUR single interviews.

I am deconstructing, as if I had conducted the interviews myself.

(Two hours later I have a fourth listen. Why? Because I believe that the effort made to extract learning from these audio tracks will pay dividends. The ideas will begin to mean something)

(24 hours later I have the Media Book that supports the audio. Not the transcript that I desire, but notes from the Course Chair Jane Henry. I am struck both by what I HAVE picked up from the audio, as well as arguments/opinions that totally escaped me, that I’ll have to seek out simply to be sure that these things were ever said. As I am currently on Jury Service I am struck how we as humans are, indeed have to be, selective regarding what we see and hear. We cannot take it all in. Context is everything. We are not a sponge, at best a Gouda cheese). 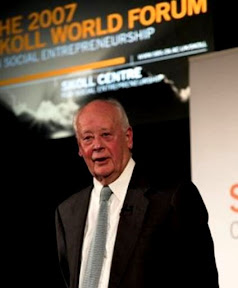 Charles Handy (born 1932) is an Irish author/philosopher specialising in organisational behaviour and management. Among the ideas he has advanced are the …

1.Globalisation: organisations have got bigger to be there and smaller to be human

People are identifiable people with names who have to be cossetted.

Reorganise into projects and teams so that people know each other.

People will have to reinvent themselves. 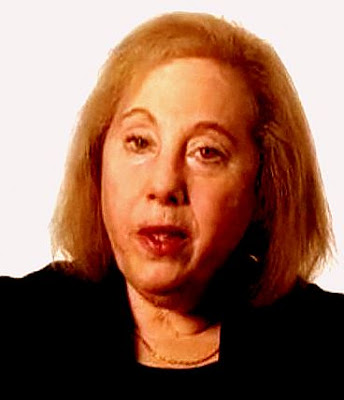 Professor Kanter holds the Ernest L. Arbuckle Professorship at Harvard Business School, where she specializes in strategy, innovation, and leadership for change. Her strategic and practical insights have guided leaders of large and small organizations worldwide for over 25 years, through teaching, writing, and direct consultation to major corporations and governments.

Interviewed for the Open University’s module B822 ‘Creativity, Innovation and Change’ Module she talks for the need for:

The ladders aren’t there anymore.

For me this is a concept that rings most true having contemplated how to assemble a team of people with different skills, indeed, why a variety of skills are necessary and that these should be distinguishable and come from the contrebutions of several people. Currently, social media, is vested in one person, whereas it should be shared across several skill sets. The creative teams in advertising are made up of a copywriter and art director, in a web agency we had an editor, designer and programmer. In each case a producer is required too. 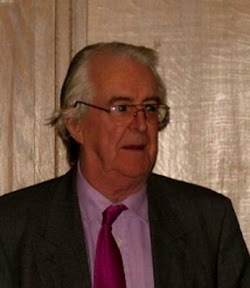 Charles Hampden–Turner (a dilemma enthusiast), they talk these days not so much of country stereotypes as the need to understand individuals. He received his masters and doctorate degrees from the Harvard Business School and was the recipient of the Douglas McGregor Memorial Award, as well as the Columbia University Prize for the Study of the Corporation. 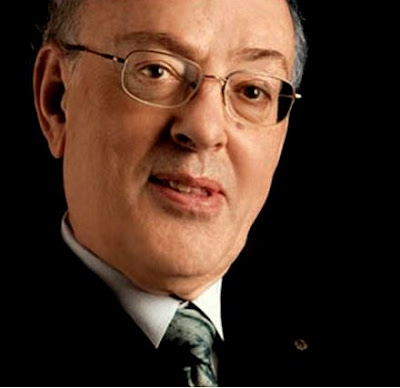 Professor Henry Mintzberg, OC, OQ, FRSC (born in Montreal, 1939) is an internationally renowned academic and author on business and …