So advises Google as you undertake 12 hours of self-directed online learning to become a certified educator – Level 1.

Easy said, harder to fulfill if you are being overlooked by your employer, scrutinized by your peers and exposed to unsympathetic and potentially cruel students.

A response to any challenge: it takes time, experience, risk and a sense of what you are capable of

Fig.1 The only time I ever got down this precipitous drop in one go, falling the fall line, was as a fit and by then experienced skier. Plagne-Bellecote, France.

It took eight years, a badly smashed leg, both thumbs and a rib. It is thirty years since I have been in the flat we used then – this is the view from the window. I have no intentions of getting any closer than this. Instead I will join the Ski Club of Great Britain Guide and in so doing learn from others and remain in one, unbroken piece.

My H818: The Networked Practitioner

Though I completed the Master of Arts: Open and Distance Education (MAODE) last year I didn’t feel like a ‘master’ – further modules as continual professional development have realised this: H809 for research and H818 for applying and sharing in an open and ‘directed’ way. My background is a producer in corporate L&D so the aim has been to support the shift from linear to interactive, to connected and open learning founded on applied knowledge of a number of learning theories.

H818 pulled together or touched on a number of personal interests:

There’s a difference between open (small ‘o’) and Open (large O): the latter, as I have done over 14 years posting content, is akin to ‘exposure’ – putting it all out there; whereas the Open movement to be effective, ironically, requires parameters and goals. From H818 the need to, reasons to and how to ‘ask’ became apparent.

The outcome of H818 is the Quick Response code in a Poppy to support open and connected learning about the First World War. As a creative exercise despite being unable to single out a ‘partner’ the working process has been akin to that in advertising where the creative team is a copywriter and a visualiser, with one if these or both likely to have programming skills – or the creative team becomes three. Openstudio online is like the studio I worked in at the School of Communications Arts where I was a student and now mentor.

The ask component has two parts to it:

I post then share blog posts on the QR Code idea via WordPress and a number of platforms: LinkedIn, Google+, Twitter, Facebook, Pinterest and Stumbleupon. This at best makes serendipity a possibility but is small ‘o’ – though the connections directly from this include BBC TV, BBC Radio 4, the national trust, King’s College London and a couple of people with direct, personal connection to the content I have posted – they recognise a face from a 1918 postcard.

The second part is, still early days, putting the idea to individuals and groups directly and asking questions that I take care to recognise where they are forthcoming. Using the above social platforms the request is directed at an individual, or to a specific specialist group. The ‘use of QR codes’ in education has uncovered far greater use and interest than the current papers suggest. Direct questions have gone to niche interest groups such that ‘talks’ on the use of QR codes in this way will be given to schools and to regional history associations. Not all that I approach have responded – this kind of ‘ask’ is a kind of selling or PR. It isn’t simply connectedness, it is networking too that expects a professional offering and response. ‘Consultancy’ is one thing, but the production side of it – seeing content successfully briefed in, financed, designed, scripted and delivered is my aim and so with tentative steps ‘Mindbursts’ is coming to fruition and will build on some 15 years of creating learning content in the corporate sector.

The second outcome of H818 is to try and continue and build on the relationships that were developed. In LinkedIn two groups have been set up: ‘The online masters’ and ‘MAODE’ – early days, but experience from the Open University Business School shows how from tiny beginnings great things can grew. The challenge in the early days will be to keep the kindle alight so that there is just enough ‘vibrancy’ to make it a worthwhile place for current and future members. Similarly, a blog where all members have ‘editor’ rights has been set up.

Returning to the idea of big ‘O’ and little ‘o’ it strikes me that my little ‘o’ behaviour is akin to being loudly in a crowd while big ‘O’ requires directed engagement and responsiveness. Which has me wondering that a journalist writing for a paper with its parameters and audience is more open than hiding behind the obfuscation of the blog. Which in turn, as has occurred throughout H818 has seen me completing a huge loop into an online world of the possible to the offline world of the actual and realising that quicker than I imagined learning is increasingly blended whether you put an ‘e’ or an ‘o’ or an ‘m’ in front of it. 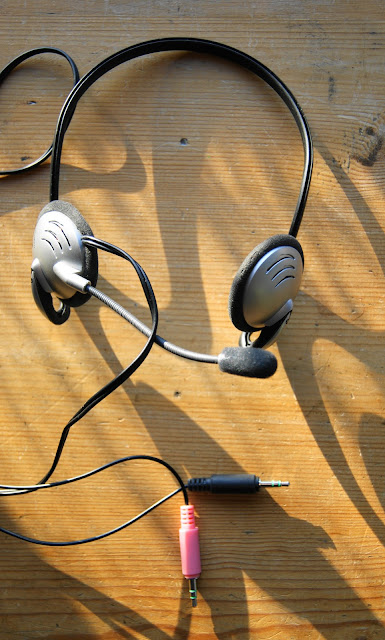 I was up at 3.30am and I’m not even presenting. I use these early hours to write – pulling together ideas before they blow away in the wind of daily life in a household where the number of teenagers has suddenly doubled. We have the older teenager couple, and the young teenager couple … and the parents of two of this lot looking at each other and thinking ‘we’re teenagers too’.

Three hours of short presentations and without exception each has an impact and contribution to my thinking an practice.

This despite the presence of a lorry full of blokes with pneumatic drills who attacked the house an hour ago – cavity wall insulation.

I am sitting here with industrial strength headphones – for a ‘test to destruction’ I’d say that these Klipsch headphones are doing their job admirably. I ‘suffer’ from having acute hearing … I do hear the pins drop a mile away. I need headphones like this whenever I leave the house otherwise travelling is a nightmare.

The great value of a session like this is to listen to your fellow students – a voice, more than a face, evokes character and conviction. Not that I ever doubted it but everyone is clearly smart, focused and keen to ‘play the game’ when it comes to using online tools.

There isn’t enough of it.

The OU has a habit of designing the life and risk out of a module. Bring it back. Vibrancy and energy are born of risk.

Taking more ‘risks’ is better than taking only one.