Unscrambling the presumptions of research in e-learning educational practice

Activity Theory (AT) according to various authors …. , supposes a quest to solve a problem, an ‘activity theorist’ looking at certain kinds of research, understanding activity system as being driven by outcomes, would therefore annotated the six nodes of the AT pyramid with this in mind. 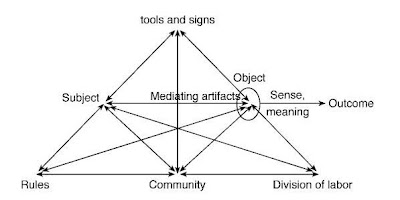 In contrast, considering the same subject of research, a sociologist would be inclined to look for power structures.

In turn how might a management consultant, or psychologist approach this? And in relation to H809 and the MAODE, how differently would someone educated in each of the following theories approach the same subject matter: behaviorism, cognitivism, constructivism and connectedness?

The suggestion that the theory behind a piece of research or OER from H809 TMA02 predisposes a specific research response is like having an undefined medical problem. In turn each specialist offers a view based on the narrow perspective of their specialism.

By way of example, with sinus/earache like symptoms from which I have always ‘suffered’ I in turn visit a neurologist, immunologist and dentist. I discover from each in turn that I must be depressed/stressed, have an allergic response to something, need a tooth filled/crowned. In turns out that I have a pronounced response to house dust mite and due to physical damage to a channel in one part of the maxillary sinus it doesn’t drain so the slightest infection, a mild cold, will cause inflammation and pain. The response that works is primarily preventative with self-medication of prescription pain relief at a dosage that works – co-codomol and occasional antibiotics. (The above over a 33 year period of investigations that included several other excitable consultants who each in turn gleefully hoped that I might have a very rare condition X or Y that they would investigate).

Just as medical specialists are inclined to come at a situation with too narrow a perspective, so too can we when wishing to study, in a learning situation, what is going on … in there (the brains of each student) and externally, the context and situation of the ‘learning’ that they are doing (or having done to them).