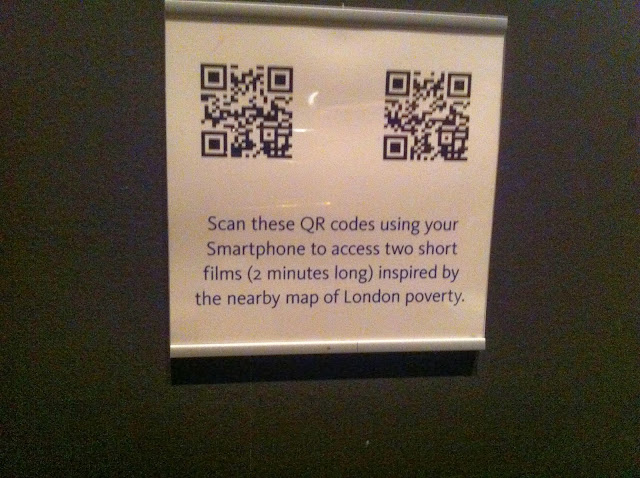 The last couple of months have led me to QR codes and their potential for use in museums on site visits and walks. I’ve had to do a couple of these to gain a full insight. At the Museum of London they also use NFC or ‘Near Field Codes’. As I don’t have an Android phone these were redundant. The few dozen examples of NFC codes were sponsored by Nokia. I saw no one, at a busy museum getting out their phone to use these (they operate like an Oyster card – you tap/touch to create the link), nor did anyone else use the QR codes The museum visit is rich enough without the need for ‘links away’. I can take an hour, a couple at most, in places like this. Today I was engaged for three and a half hours and skipped lunch. I was enthralled and drawn in. The design of the journey through the exhibit is a challenge – trying to second guess such a variety of visitor interests. Today there were several distinct groups – the elderly retired, some apparently on an organised trip and primary school children split into five or six classes … and a few older students, possibly A’Level, and some language students (these groups far smaller) and a group of young adults with learning difficulties. The layout is like a visit to Ikea – it snakes around. There is ample space (for crowds) and I armed myself with a chair so that I could, frequently, stop to take in an exhibit, to watch a video, to complete an exercise or to play with the artefacts: touch, buttons, interaction and so on. And to try some of these QR codes. In each case I got user generated style video – so by, apparently, a visitor, typically young, with attitude and from an ethnic minority. This, on reflection, gave a sharp, necessary and insightful contrast to the exhibits. I came away though thinking it was unnecessary, that at such a richly resourced and planned location QR codes would serve a better purpose on the street, or in particular, adding considerable and necessary colour to a battlefield tour – where generally there is little more than a plaque.

By Jonathan Vernon in E-Learning, H818: The Networked Practitioner, M-learning, MA in Open & Distance Education, Mobile learning on November 17, 2013.
← City Stories: city guides for the Web 2.0 empowered Is Amazon becoming the educator of the Internet Age? →